If you don’t have at least $250k under your name, you can forget about ever owning Ferrari’s most iconic ride, the Ferrari 512 Testarossa. Your kids, however, will be a little more fortunate because at least, your kids will have a kiddie size variety you see here which costs ‘just’ about $97,000. Quite a steal, don’t you think so? Ok, maybe not. Anyways, this kid-size Ferrari 512 Testarossa is one of the only three originally built, with Ferrari’s blessing, of course, exclusively for Harrods three decades ago. When it was launched, it was sold at a cool £35,000 (about US$45,000) and if you think that was a princely sum (which it was, btw), wait till you hear how much it cost today. 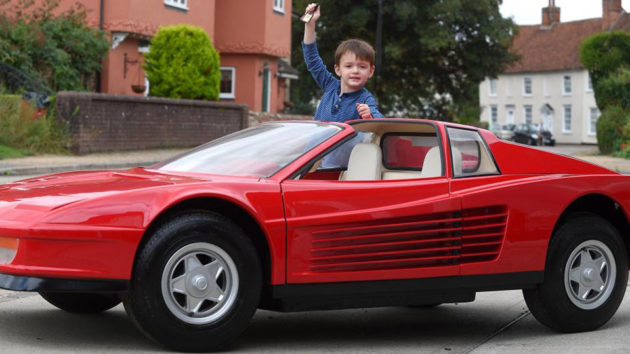 Since then, the price has swelled to double of the original sticker, or at least it is the case of this particular example. Shocking indeed because at this price, it is essentially way more than the price of a regular car, be in the U.K., or across the pond, in the U.S. Designed for kids aged 5-9, this kids’ variety Ferrari 512 Testarossa was not quite it was a year ago. It was said that the condition was in “poor state,” but it was painstakingly restored by Howard Wards Automotive’s Riddelsdell Garage to its former glory and hence, the price. Of course, the even more princely sum it commands today is also due in part to its rarity, remembering that only three were ever built. 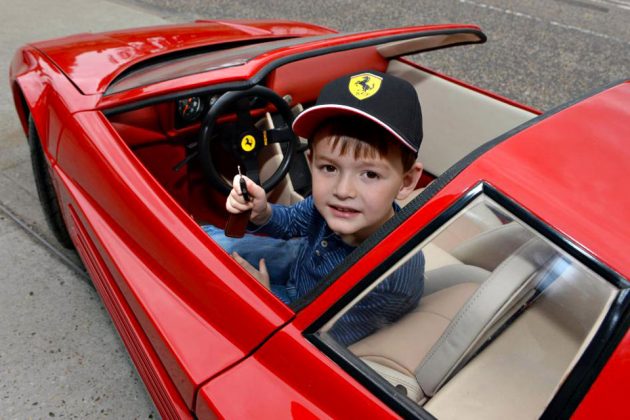 Obviously, the fact that it was detailed faithful replica of the real thing also plays a part in the price. Speaking of which, this baby 512 Testarossa features a fiberglass body, real Ferrari steering wheel, leather interior, and working doors, hood, trunk, gauges and even pop-up headlight. It looks like it even have a proper ignition key. Wow. Just wow. While similar in aesthetic, this little guy’s Testarossa has no 500 bhp V12 motor (obviously). Instead it gets a cute sub-200cc lawnmower motor that wouldn’t make more than 25 mph (40 km/h). However, 25 mph may not sound like much, but proportionally, it could be as quick as the real thing. Also, it is obviously not road-legal.