When you are younger, you dressed up in the craziest Halloween costume but now that you are all grown up and have your own kid (or kids), it is time think about junior’s getup so he or she can go trick-or-treat in style. If are really thinking about it, here’s a brilliant idea coming from Ohio-based crochet enthusiast Stephanie Pokorny. She has made an stunning E.T. costume for her son, Jack. The fact that Jack is too young to know who the heck E.T. is doesn’t stop Stephanie from freehanding the suit without a pattern or whatsoever.

She just keep working the regular worsted weight yarn with her skill hands and intermediately tried on baby Jack, stopping when the costume fits. Now, that’s some crochet skills there! And the result pretty much speaks for itself, doesn’t it? All told, it took Stephanie just four days to complete and at a cost of just $10. Unfortunately, the costume is one-of-a-kind and can’t be acquired. However, Stephanie is considering letting the world in on how she created this super adorable E.T. costume, so any who’s care can create one too. So, if you are interested, you can follow her on her various social media to keep yourself in the loop. 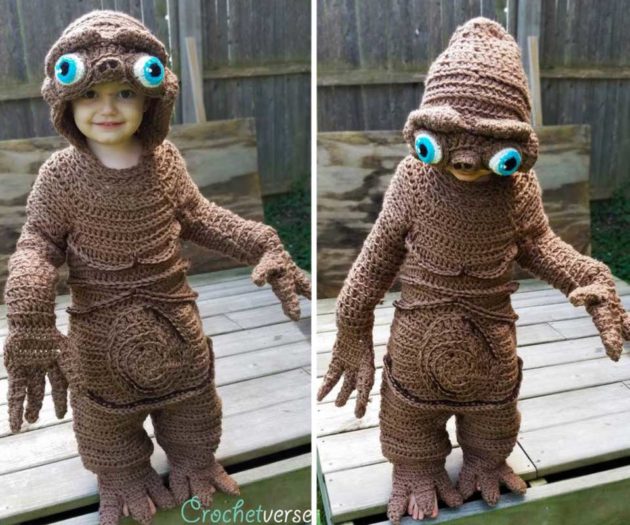 CrochetVerse via Lost At E Minor