PC makers haven’t been thinking out of the box, like quite literally, until recent years. Previously, PC chassis is nothing more than an rectangular box, but that changes when the trash can-like (but sleek) Mac Pro came onto the market. Even then, it took other mainstream makers a couple of years to came up with their own designs that challenge the status quo – starting with the MSI Vortex, and now, Samsung has also joins the non-boring shape PC movement with its own avant garde ArtPC Pulse Premium Desktop Computer (DP700C6A-X01US), which quietly creeps into the marketplace without much fanfare, or press brief. 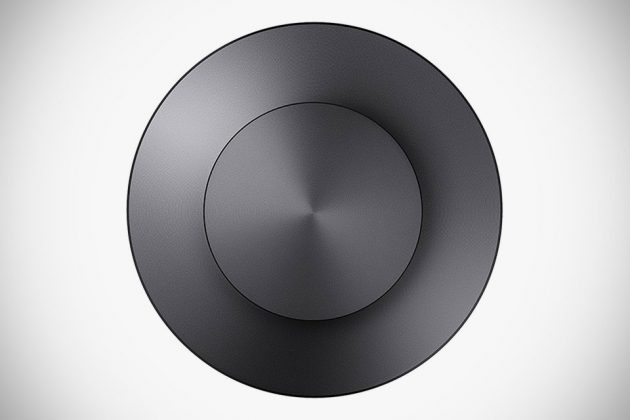 Sporting a full metal body design, ArtPC Pulse is clearly designed to be seen, though it is certainly not the neatest we have seen. However, sound lovers may appreciate the inclusion of a Harmon Kardon 360-degree omni-directional speaker, which clearly is one of its main selling point. Also, it has nice ambient light for, you know, a touch of sophistication and probably, sci-fi look. The picture can’t really show its stature, but we can assure you that this thing is tiny; it measures mere 5.5 x 5.5 x 10.7 inches and tips the scale at 7.4 lbs.

Under the hood, it offers an Intel Core i5 processor clocking in at 2.7 GHz, 8GB SO-DIMM RAM, 256GB SSD, along with an rather unexciting Radeon RX 460 GPU with 2GB VRAM. Obviously, it is not a Vortex competition, neither is it a workhorse for heavy graphics lifting, but it should be more than ample for today’s most common uses of home PC like surfing the web, dealing with Office docs, consuming high resolution medias such as 4K contents, and dealing with basic graphics editing to create funny Internet memes (ok, maybe more than just memes).

ArtPC Pulse also touts expansion modules which, presumably, enable it to be customized to the spec of your desire (in future), like bumping up the storage, but not a lot of details is available on this aspect – yet. In summary, Samsung Electronics ArtPC Pulse Premium Desktop appears to be ‘just another PC’ and hence, it is priced as such. Wait. Not really. With a base price of $1,199.99, it is not exactly cheap among its cohort even though it is significantly cheaper than Mac Pro (obviously), the MSI Vortex, and possibly HP Pavilion Wave.