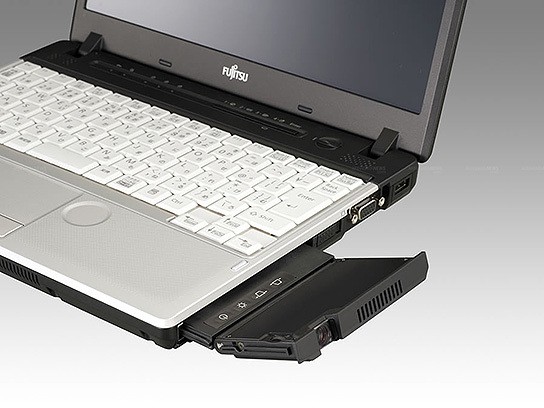 i suppose there is a market for laptops with built-in projector, else Fujitsu wouldn’t be introducing such an integration. from next month a couple of Fujitsu B2B laptops with integrated video projector will debut in the market. the two models are Lifebook S761/C and P711/C with 13.3-inch and 12.1-inch screen size respectively. both will come with an optional SVGA (800×600) video projector module in place of where the optical drive would be. great, no more worries about being caught without projector in your next big break presentation.
[ad#Google Adsense-text-468×60]

i not quite sure if the option for a built-in projector would differentiate Fujitsu’s Lifebook range in the laptop market. it is certainly a nice idea but 800 x 600 resolution projection is hardly anything to shout about. then again, it could save you the hassle of lugging a separate projector to a presentation, and perhaps, impressing your clients at the same time. at least for now before this become a standard among the slew of laptops in the market.