Most cows that are bred for their meat are destined for the abattoir. Hardly will they ever escape the slaughterhouse, but there are exceptions, like this unusually large Holstein Friesian, a breed of dairy cattle. This cow dude here has grown, like a lot, to reach a mind-blowing proportion of 194 centimeters tall (6 feet 4 inches) and tipping the scales at a grand 1.4 tonnes (1,400 kilograms, or about 3,086 lbs). The height is well over an average person’s height and the weight there… well, let’s just say that you don’t want to be standing next to it when it is feeling dizzy. 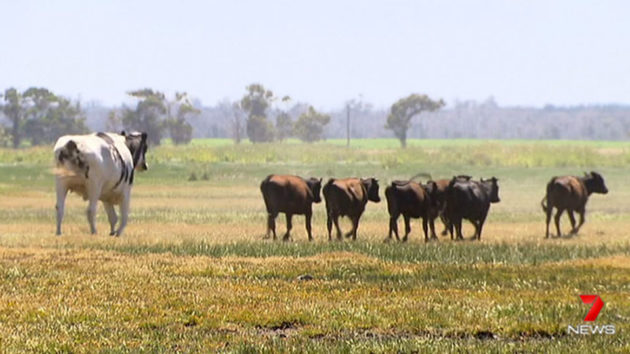 Man, over 3,000 lbs! That’s absolutely insane. I bet no one has ever imagine a cow weighing as much as an automobile. Seriously, what kind of monstrosity is this??? Anyways, because of it being larger than life (like quite literally), this giant cattle named Knickers has his life spared because, as his owner Geoff Pearson explains, the enormous size prevented him from putting it through a processing facility. I guess that is the perks of being unusually huge.

As you can see from the images, Knickers is humongous. He stood out like a sore thumb among the herd which made up of cattle of regular size, averaging 4 feet an inch tall and weighs around 1,500 lbs. Even the largest of this breed, the bulls, only managed a grand height of 5 feet and 10 inches and tip the scales at around 2,200 lbs. Pearson’s unusually large cow is thought to be the largest steer in Australia. A steer is, btw, a castrated male bovine. And oh, yes, it hails from a small town called Myalup in Western Australia. Now, that’s one hell of a cow, isn’t it?

NOW READ  Écrou De Cartier: Threaded Bar And Nuts As Jewelry Because Why Not?