Here’s an interesting concept action figure/toy car design by Taiwanese designer Goodzilla based on “the legendary speeding uncle from Japan.” The story went that sometime in March 2018, a 41-year-old Japanese man, Yoshimune Shirai, was arrested for speeding. The man was reportedly going at a mind-bending 235 km/h (146 mph) in a Dodge Challenger. At one point, he even hit 240 km/h (149 mph) to keep up with a Shinkansen train.

The speed may not sound like a big deal, but that speed there was pulled off on the streets and not the track, and that obviously put both the driver and others in harms’ way. In any case, under normal circumstances, anyone caught speeding, however fast, won’t be this sensational. What made this man so sensational was, at the time when he was arrested, he presented a smirk on his face like, you know, a psychotic killer’s smirk after he/she was apprehended, as we often seen in the press and on the news. Not that this man is a psycho or maniac, but I think you get the idea.

The man’s expression when he was caught had the Internet describing him as a man who loses to the law, but won his own heart (as in fulfillment or something along the line). Goodzilla is not advocating that people to speed, though. In his message, he did caution about the deadly consequences of speeding. Anywho, Goodzilla designed an action figure of this purported “modern Japan legend” accompanied by his car, in toy form, of course, that comes complete with a blister card with graphics referencing his insane speed that kept up with the bullet train. 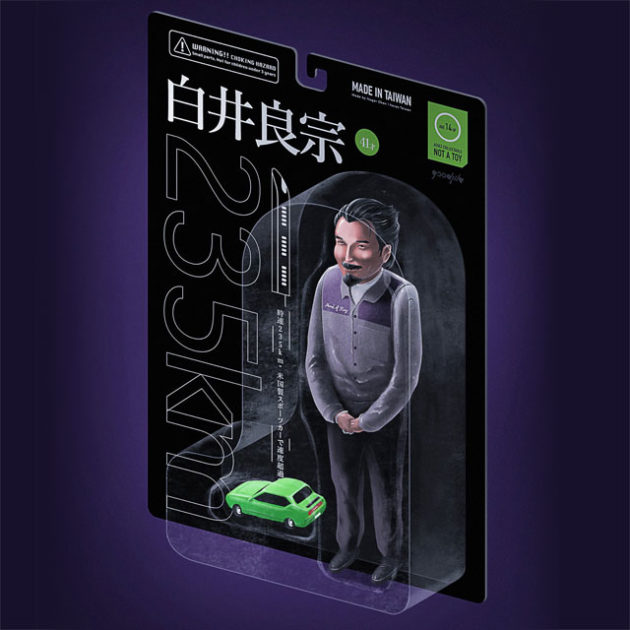