Here’s another ‘don’t say we didn’t tell you’ post and this time, it is the well-received, but pricey Google Pixel C tablet that’s getting a significant* discount. Google has taken $100 off the 64GB model’s original price on Google Store (online, obviously). As mentioned, the discount only applies to the 64GB model and after lopping off 100 bucks, the 64GB model is the same price as the 32GB (32GB is out-of-stock anyways), which kind of makes it a good deal. However, it is by no means cheap in Android tablet standards. Pixel C is premium device and it was never cheap with or without discount. It is just ’good deal’ with respect its original price. 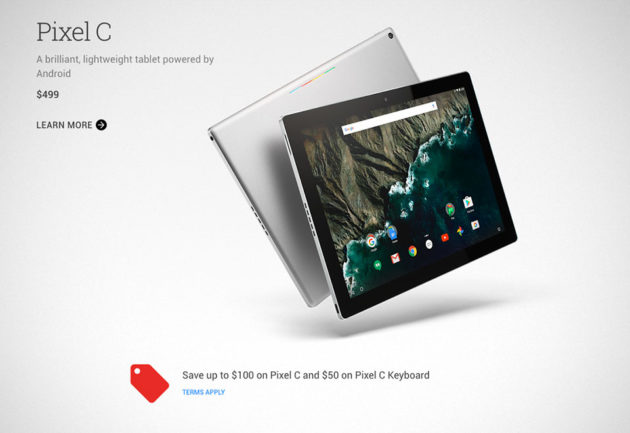 Anyways, if you are in the market for an Android tablet and assuming the last holiday season has not exhausted your capacity to spend, this could be a good opportunity to save some money without settling for pre-own unit. And while you are there, you may be delighted to know that you can get $50 off the optional 99 bucks Pixel C keyboard too. I thought getting both would be a much better deal as you can see significant savings (again, not that it is affordable by any account). And oh, one more thing: the $100 off deal only last till January 7th, which means you have around two days to act on it, well, that’s if you want one. You’re welcome and sorry for being so late on this one. We nearly miss out on letting you in on this one. Our apologies.