Gresso is a European brand more known for luxe-ing up iPhones and turning insanely priced bumper case, but now it has its sight set on the Android users or to be specific, Scrooge McDuckian-type of Android users, with its limited edition Radical series Android smartphones. there are three models to choose from: Radical R1, Radical R2 and Radical R3, each differing from one another by material… of the logo plate. yes. just the logo plate. talk about of subtle touch. in any case if you are feeling kind of opulent, you can grab the Radical R1 for $1,800 and the Radical R2 and R3 version for $2,300 each. basically, the innards are the same across the three Radicals and as for the logo plate, the R1 has a ‘plain’ titanium plate (manually polished, no less), while the R2 and R3 are adorned with 18K yellow gold and 18K white gold version, respectively.

though pricey, the Gresso Radical Series Android Smartphones, like most luxe smart handsets out there, don’t have over-the-top specs to match. packed into its 219 grams grade 5 solid titanium body is a 1.2GHz quad-core processor, a 4.5-inch qHD touch display, dual SIM support, a 8MP rear-facing camera, and an odd 36GB onboard storage. the keys (aka the buttons) on the phone are also of the same aerospace-grade titanium and each phone is hand assembled just like a luxe phone should. the device runs on Android 4.1.2, though we have absolutely no idea whether if the OS is skinned or not, or will there be special concierge kind of treatment. each Radical has a limited run of just 999 units (each set will be individually numbered, naturally), so don’t procrastinate for too long if you want one – if you have that kind of money to drop. 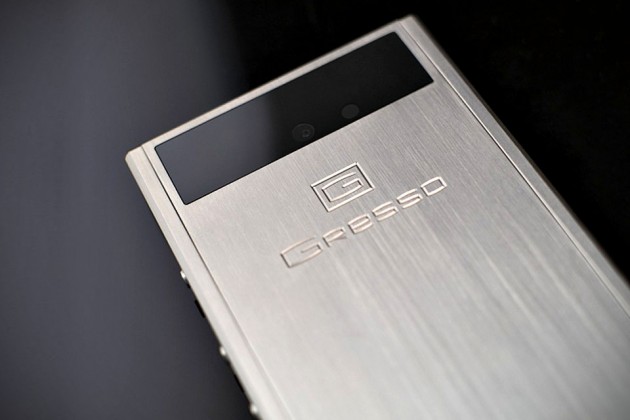