If you don’t already know, the future is upon us. The future where you can order something online and it will be delivered to you by an airborne drone, well, at least that’s going to happen for the world’s biggest e-tailer, Amazon. The talk of drone delivery has been going for a while now and if you are still clueless about how it works, fret not, cos’ Jeremy Clarkson is here to explain to you how the entire system works and how you, as a Amazon Prime customer, can benefit from it. And yes. That’s Top Gear’s history most notorious presenter, Jeremy Clarkson there presenting the facts about Amazon Prime Air Drone delivery service, as commissioned by Amazon.

Don’t worry, this video is completely violence-free. There’s no sarcasm involved and neither was there vehicle smashing scenes. So, it is totally safe for viewing for anyone between zero to infinity years old. Anyways, back to the drone. According to the video, which also stars a family in soccer shoes-related distress and a bulldog named, Stuart, Amazon Prime Air Drone promised to make the delivery to certain locations in 30 minutes or less, using a vehicle that’s a hybrid of a helicopter and an airplane. Once loaded with the parcel, the aircraft will take off vertically and upon reaching a set height, it will travel horizontally like a regular airplane. 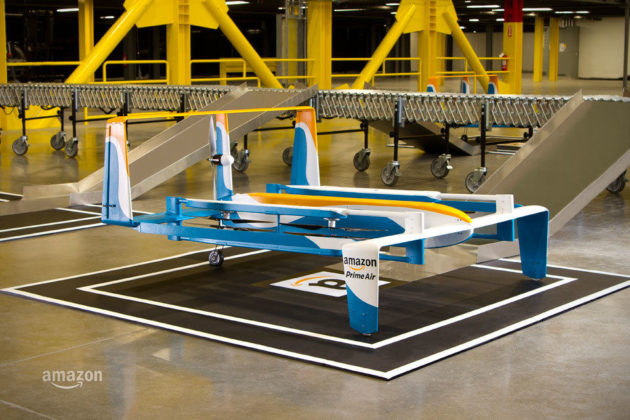 So, it is not quite a multicopter as it does not pitch forward in order to move forward; instead, a rear-facing prop provides pushes it for the rest of the journey until it locates its target. It is also noted that the drone’s design will differ for different environments, which means the flying platform you see here may not be the final one or the only design we will see zipping through the skies in near future. The drone is, naturally, loaded with sensors and stuff that will enable it to avoid colliding with anything in the air and on ground as it makes its way to and fro the delivery.

As for the particular drone you see here, it is a 55 pounds aircraft, complete with proper payload bay good for 5 pounds of stuff and it is well capable of an altitude of almost 400 feet and up to 15 miles range. And so, when can you expect Amazon Prime Air at your backyard? Well, not very soon, cos’ there are some outstanding regulatory support needed to be address before it see fruition. But it won’t be far away. Probably sooner than a real, require-no-special-surface hoverboard can be become a reality. Keep going for the said video.