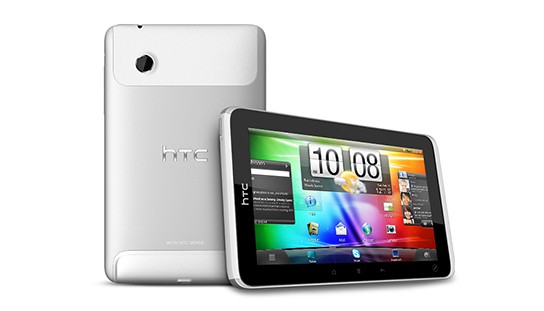 after the success of Apple iPad, we have seen a slew of tablets coming on to the market and the latest to join the fray is the just announced HTC Flyer. clad in a gorgeous aluminum unibody design and powered by a blazing fast 1.5 GHz processor, the HTC Flyer is ready to position itself as a compact and yet powerful tablet. the HTC Flyer will spot a seven-inch display and incorporating HTC Sense user interface, reengineered specifically for the tablet. coupled with the support for high-speed HSPA+ wireless connectivity, HTC Flyer will offer unparalleled web-browsing experience, supporting both Flash 10 and HTML 5.

one of the highlight of the Flyer is its ability to accept both touch input as well as pen input, thanks to the HTC Scribe Technology. according to HTC, this technology “introduces a wave of digital ink innovations that make it easy and natural to take notes, sign contracts, draw pictures, or even write on a webpage or photo.” it’s touted to let user “rediscover the natural act of writing.”

judging from the incorporation of HTC Scribe Technology alone is enough to tell us that HTC is taking user experience extremely seriously. here’s an excerpt from the press release that explains about how this technology is going to change the way we take notes:

“HTC Scribe Technology on the HTC Flyer tablet transforms traditional note-taking into smart note-taking by integrating natural onscreen writing with thoughtful and integrated innovations. A feature called Timemark enables you to capture the audio of a meeting in line with your written notes, so tapping on a word in your notes instantly takes you to that exact place in time in the audio recording of the meeting. Notes are also integrated with the calendar so when there is an appointment reminder you are automatically prompted with an opportunity to begin a new note or in the case of recurring meetings, to continue where the last meeting left off.  In an industry first, the HTC Flyer tablet also features built-in synchronization with EvernoteTM, the world-leading notes application and service.”

HTC also announced the premiere of HTC Watch, a new video download service that is touted to be a “low-cost on-demand progressive downloading of hundreds of High-Definition movies from major studios.” the Flyer also has the gaming aspect covered in the entertainment department with the integration of OnLive Inc.’s cloud-based gaming service. when fully integrated, this service will allows user to port the gaming experience from the tablet wirelessly to their television sets, or play the game directly on the HTC Flyer. this will means that future users of the HTC Flyer will be able to enjoy popular games such as the Assassin’s Creed Brotherhood, NBA 2K11 and Lego Harry Potter. however, there’s no indication of when both the HTC Watch and the cloud-based gaming will be made available and whether will it be restricted by regions. which we are keeping our fingers crossed that it will not be restricted.

at this point, technical specifics are sparse but we should be getting more information pretty soon. even though its only a single image and a lengthy passage on the HTC Flyer, i’m already sold. the HTC Flyer is slated for a worldwide release sometime in the second quarter of 2011.