with phone sizes growing to an enormous 6-inch plus proportion, you may wonder if it will go beyond and break into the 7-inch territory. apparently, it will, or rather it has. though the 7-inch MediaPad X1 from the Chinese communication hardware giant Huawei is a regular Android tablet, it is also one incorporated with full phone functionality that allows you to use it to make calls and do just about everything a smartphone can do. never mind the fact that placing a 7-inch slate on your ear may look somewhat ridiculous (but you could always use a Bluetooth headset as a more subtle approach), it has that functionality anyway. the device tips the scale at just 239g and is 7.18mm thin, and sports super narrow bezel (that naturally, stole our hearts) flanking its 7-inch 1,920 x 1,200 LTPS display. according to Huawei, the X1 has a screen-to-body ratio of 80%.

processing power comes from Huawei-own HiSilicon Kirin 910 quad-core chip, clocking in at 1.6GHz, supported by 2GB of system RAM, while graphics grunt is handled by Mali450-MP4 GPU. other details include onboard storage of 16GB (upgradeable up to 32GB via microSD card), support for both LTE TDD and LTE FDD network, as well as HSDPA+, a 13MP f/2.2 autofocus rear-facing shooter with hybrid IR flash, a 5MP front-facing camera, built-in GPS with A-GPS, WiFi (supports wireless n; dual-band for LTE version), Bluetooth 4.0 LE, dual noise reduction microphone, DTS sound, 1080p (at 30 fps) video playback, and a massive 5,000 mAh lithium polymer battery built into it. and oh, like the MediaPad before it, it has an irresistibly beautiful aluminum body.

the Huawei MediaPad X1 comes in four hues: white, black, champagne and light pink and is expected to surface in markets including China, Russia, Western Europe, Middle East, Japan and Latin America starting March 2014. official press did not contain pricing, but we heard it will be going for 399 euros. we heard. check out a product video and also an awesome marketing video that kind of makes us adore Mary Day. seriously, don’t miss it. you can find both videos after the break. 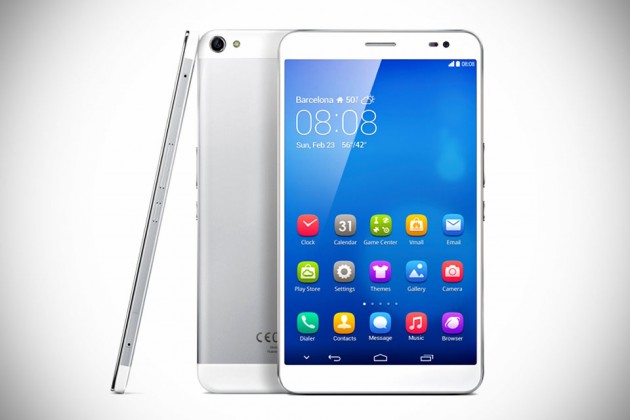