While many of us reminisces about the tech of the bygone era by talking about it occasionally, video game engineer Chris Larkin went about recreating it. In Chris’s case, he have a special affinity with the classic Apple II computer which he had as a kid and so he decided why not build one since he was looking for some project to work on with a tiny self-contain $9 CHIP board? So, yeah, Chris not only recreated his favorite computer, but in miniature proportion. The result is an palm-sized Apple II computer, featuring an accurately painted 3D-printed enclosure, complete with a TFT LCD display and an Apple II emulator that allows it to function like an actual Apple II. 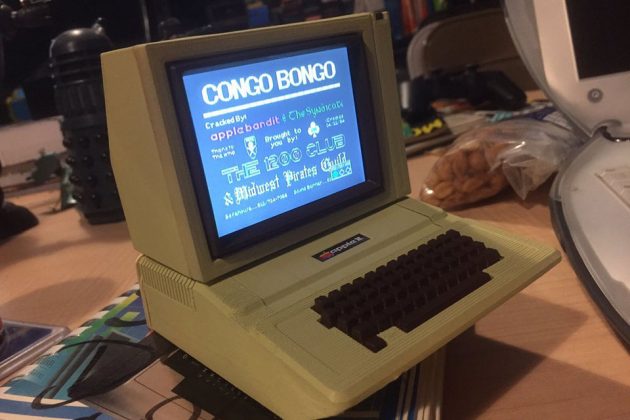 The keyboard there, however, is non-functional. Instead, input is via wireless keyboard. This minuscule Apple II also supports Bluetooth keyboard too. The only thing it is lacking is joystick support and a functional contrast adjustment dial (the one on the miniature Apple II is just for show). The power button works though, and it even has a tilt-able display, just like the original. And oh, it has built in speaker, has video-in for using the built-in display for outputting videos outside of the computer, and it runs off a 1,900 mAh drone battery which Chris reckon should gave it around 8 hours of run time. Cool. It is good to know that you can actually bring on the road too.

As cool as it is, there’s little to no modern day applications for this build. It is more like a memento kind of project and it should serve to reinforce your status as a true Apple geek and clearly, it is way better than having a dummy miniature. If you are ready to roll up your sleeves to make one, you can find the files and instructions shared by Chris on GitHub. Have fun! Oh, before you go, you may want to catch Chris segment on Tested show below to learn more.