Chip maker Intel has been extending its reach into the drone market by offering drone makers and enthusiasts with the ‘brain’ for drones, providing computing, sensor, communications and cloud integration for the drone ecosystem and in October, it takes that involvement a step further with the introduction of the company’s first Intel-branded commercial drone, the Intel Falcon 8+. Destined for the North American markets and building on the European AscTec Falcon 8 system, the Intel Falcon 8+ is armed with eight rotors and boasts a forward camera mount, full electronic system redundancy, automated aerial-sensing solutions “with best-in-class” onboard sensors and a triple-redundant AscTec Trinity autopilot to take the piloting chore off your back. 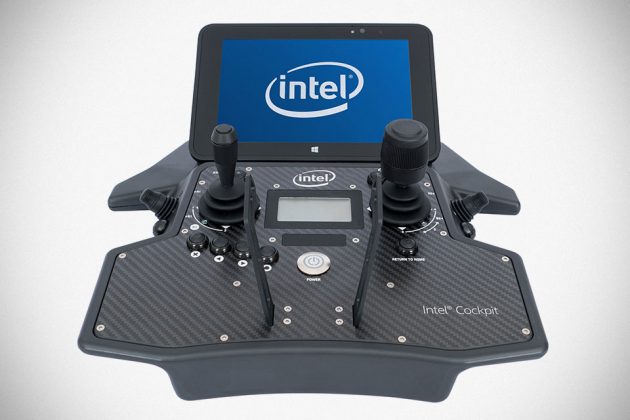 As hinted by the forward-facing camera mount configuration and also based on Intel’s own words, the intended applications for the Intel Falcon 8+ commercial drone is mainly structural inspections. Though it is not clear how powerful the AscTec Falcon 8-based system is and whether if it can handle high winds and sudden gusts which drones in structural inspection often face. And then, there’s the stability issue and the question of its ability to detect barely visible cracks. ProDrones, the Japanese specialist drone maker, seems to have addressed those issues with the wall-clinging drone and it remains to be seen if Intel will be heading in that direction.

Anyways, in addition to the Intel Powerpack that powers the aircraft, Intel Falcon 8+ also includes an Intel Cockpit, which is basically a fancier way of saying ‘controller’. But it is, of course, not your run-of-the-mill transmitter. Intel Cockpit is water resistant and presumably, ruggedized. The controller comes with with dual joy stick for control, a small built-in LCD display and a display, which appears to be Windows tablet. Though it is not known if the tablet is user supplied or included in the system. The Intel Falcon 8+ Commercial Drone, or Unmanned Aerial Vehicle as Intel calls it, was officially introduced at the INTERGEO drone conference in Hamburg, Germany last month.

Before enterprises go gaga over it, you have to know that neither the Falcon 8 nor the Falcon 8+ has yet to get the nod of approval from FCC yet. So, until it does, it is a no sale item.