Remember the ‘revolutionary’ Traffic Elevated Bus (TEB), AKA straddling bus that was supposed to realized in China? After being lambasted as a big fat scam by China’s various state media, it is now most certainly dead. Yes, dead, as in a complete fail. Of course it is. It really shouldn’t surprise anyone at all. The logistics and engineering works required to make this height limiting vehicle (to other traffic, that is) a reality are nothing less than gargantuan. Major changes had to be carried to the existing roads in order accommodate TEB to which the city is probably better off going with light rail transportation or monorail like so many cities in the world did. 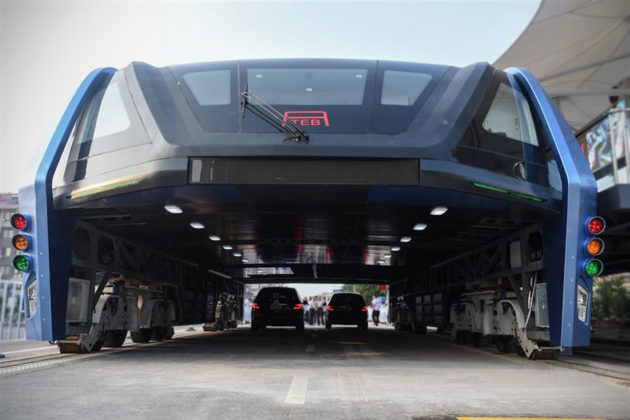 Anyways, according to a report by Shanghaiist, the 300 meters (984 feet) long rail and the prototype 5-meter (16 feet) tall mammoth “future of transportation” is now resting in its garage which, btw, also sits in the middle of a Hebei city road. Needless to say, this non-functioning prototype is starting to annoy the residents for the simple fact that it is doing nothing and hoarding full three lanes – all 300 meters of it. To make things worst, the three-lane road’s lease, which was due to expire in end August, was reportedly extended for another year. But that don’t matter as the “bus rail” isn’t not going anywhere; not even for 300 meters out which the prototype rail embedded on the road affords. 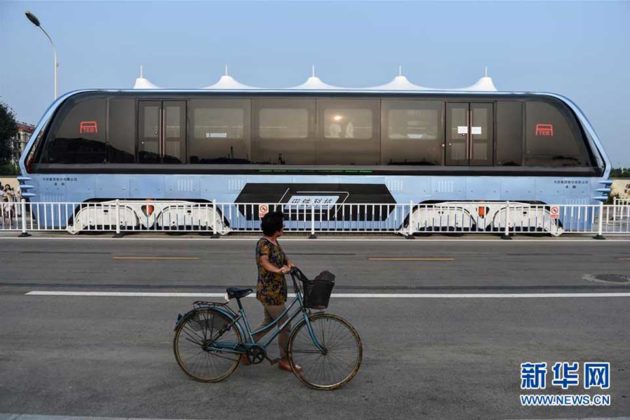 Instead, it is now sheltered under a ridiculously tall garage, in the middle of the three-lane road, collecting dust and apparently, rusting away. The vehicle is being guarded by a pair old security guards who admitted that the management has long forgotten them and the managers were not contactable. Hmmm, I wonder did they even get paid over the last few months? At this point, the fate is pretty much sealed for the transportation that took the world by storm just a few months ago and also, as much as I hate to admit, it looks like China’s state media was right after all. 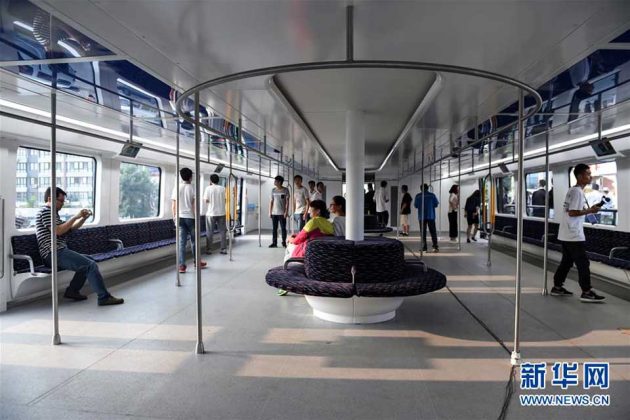 Well, I guess it was as exciting as it lasted and it is time to move on. Oh, before we end this article, here’s a little fun fact: as it turns out, the concept of car-swallowing bus-on-track wasn’t new at all. It was proposed by architect Craig Hodgetts, who calls it “the Landliner,” as a transportation alternative for the city of New York back in 1969. Quite obviously, it did not happen. Notwithstanding the technology available to us today, it won’t too for this 2016 China’s iteration because, it just won’t. Less the developer is adamant in proving us wrong, but we seriously doubt they will go to such length cos’ they can’t even do 300 meters.

China's floating bus was of course inspired by the cat bus in "My Neighbor Totoro!" https://t.co/FKtiUCBA2I pic.twitter.com/NCO85sW4om

Image and source via Shanghaiist