Road barriers serve to prevent vehicles from crossing to opposing road, going off-road, or worst, leaping off a cliff, and road barriers has, so far, prove its worthiness but not without fatalities. You see, today’s road barriers are made of metal and while metal is strong, its quality is also a potential death trap. How so? As Newton’s third law states, for every action, there is an equal and opposite reaction, and therefore, if a vehicle is hurdling towards a solid road barriers at speed, the vehicle assumes the full impact of the reaction force which could be fatal to the occupants. 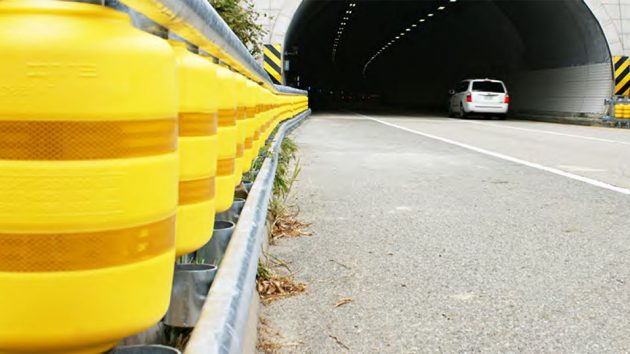 The Road Roller System by South Korean company, ETI, could potentially eliminate fatality in the event of such impact. As you can see, the barrier is not the run-of-the-mill examples you see at the side of the roads; it looks somewhat like the current barriers, but it has freely rotating plastic drums sandwiched in between metal rails. The rotatable plastic drums serve as a crumble zone to absorb the impact while the rotating action helps to redirect the vehicle away from the barrier which further reduces the force being returned to the vehicle. This in turn also reduces the incident of vehicle overturning on impact, thereby, hopefully, limiting fatality in such accidents.

We dug around a bit for more information on this intriguing road barrier and we conclude that this South Korea road safety technology is already at least 2 years old. Though so, it is a mystery why we have not see its widespread use. It could be the cost and the complexity required to install the system. However, the video posted by KSI Global Safety, a supposed Australia private company, claimed that this system will reduce “costly repairs and maintenance.” Anyways, clearly KSI’s 2014 video was referring to the South Korean company’s product as hinted by the Korean truck used in the test, but being two years old, the product does appear to be slightly different.

In the recent video posted on Fun Point YouTube channel (embedded below, after the post), the plastic drums or rollers appeared to have bands on them that burst on impact (perhaps as an indication that it has absorbed impact) while the older video showed a dual-drum set up. In any case, the concept is the same and it rightly be the case as they are the same thing.