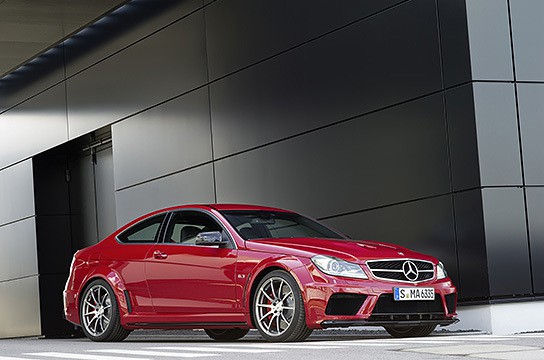 on contrary to its namesake, the Mercedes-Benz C 63 AMG Coupe Black Series is not in black but its a special souped up vehicle by none other than AMG. the C 63 AMG Coupe Black Series made its world premiere at the Formula One race on the Nürburgring, German Grand Prix on the 23 to 24 July, 2011. equipped with a fearsome 6,208 cc V8 petrol engine that pushes out 517 horsepower (380 kW) and generates a massive 620 Nm (457 lb-ft) of torque, this particular example is the most powerful C-Class to date.
[ad#Google Adsense-text-468×60]

the interior is mainly in black with contrasting red accents such as the seat belts, door center panels and armrests, center console, shift lever gaiter, as well as various stitchings. the black DINAMICA microfiber upholstery – a new synthetic fiber – form part of the AMG sports bucket seats and doors. other goodies include AMG door sills in brushed stainless steel with AMG logo, brushed stainless steel AMG sports pedals with rubber studs, and THERMATIC automatic climate control. audio is not lacking in anyway with the 20 CD radio with double turner and color display, wired to a eight speakers system. the audio system also sports Bluetooth connectivity, hands-free function and as well as an USB interface.

as if the ‘standard’ Mercedes-Benz C 63 AMG Coupe Black Series isn’t enough, Mercedes-Benz is offering an AMG Track Package as an option that includes sports tires, active rear-axle transmission cooling, and AMG Aerodynamics package that comes with a functionally tuned front splitter and an adjustable carbon fiber rear aerofoil. the 2012 Mercedes-Benz C 63 AMG Coupe Black Series is expected to hit the market in January 2012 with a price tag starting from €115,430 (about US$167,360). check out a host of beautiful images after the break.