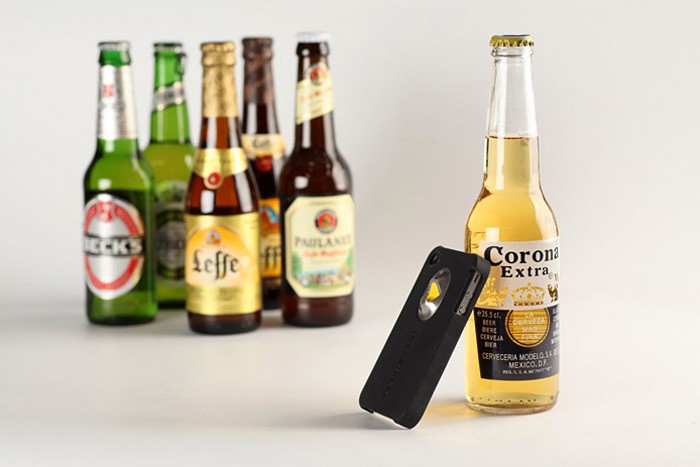 to be honest, we were drawn to this case because of its apt name – INTOXICASE – an iPhone case that let you get intoxicated with alcoholic beverages. granted, this is not the first iPhone case cum bottle opener but we simply dig its stylish bottle opener design. like the previous iPhone case bottle opener we have featured here, there’s a cool looking bottle opener integrated to its otherwise regular looking iPhone case. in case you get over your head in your alcohol dowsing session, a free INTOXICASE app is available on the AppStore to keep you drinking in check. when launched, the app set off a sound while it detects the bottle opening action and it keeps track of how many bottles of booze you have popped. the app also has a nifty feature: it can be set to call a cab when you have reached the preset drinking limit. for booze heads, the latter is probably a feature they would love to give a miss. after all, what’s a drinking session when there’s no hangover the next day? the INTOXICASE is available in two models: the standard INTOXICASE and premium INTOXICASE PLUS. the former comes with a more pronounced looking stainless steel bottle opener on a plain black polycarbonate iPhone case, while the INTOXICASE PLUS sports a collapsible bottle opener that can fold back up and become an unobtrusive part of the textured iPhone case. the INTOXICASE and the INTOXICASE PLUS will set you back at $25 and $35, respectively. check out a few more look in the gallery after the break.

INTOXICASE via The Bellingham Herald