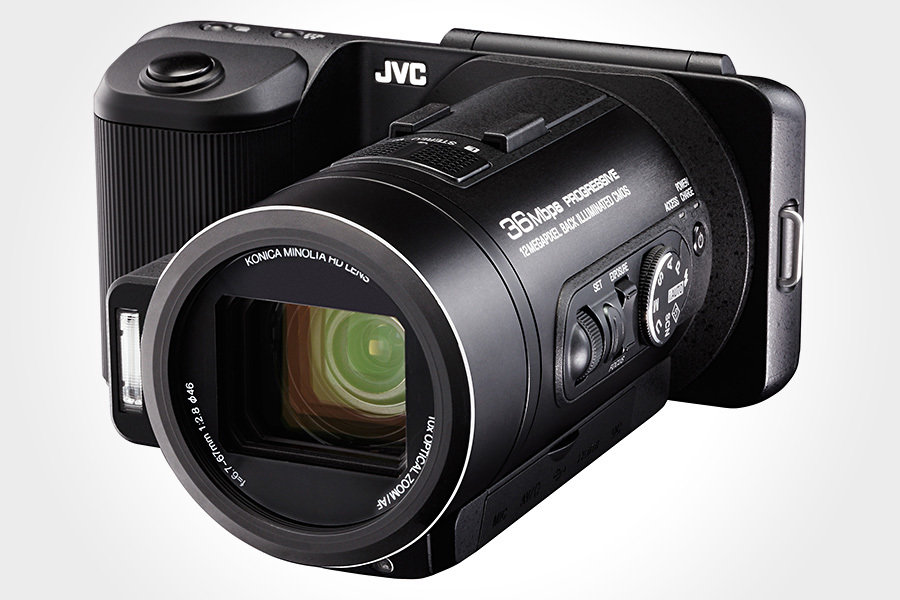 quality of video recordings in our everyday digital camera has grown leaps and bounds, and hence it makes you wonder if there’s a place for a specialize camera that proclaim to be the champion in both. nevertheless, that doesn’t stop JVC from pushing out its JVC GC-PX10 Video/Still Hybrid Camera that combines what you love about a point-and-shoot camera and the goodness of a camcorder. it is endowed with 12-megapixels back-illuminated CMOS sensor, Konica-Minolta 10x optical zoom lens, FALCONBIRD imaging processor, a tilting 3.0-inch LCD touchscreen display, and dedicated mode dial.
[ad#Google Adsense-text-468×60]

on the performance aspect, its hardware allows for rapid-fire still shooting of 8.3-megapixel (3840 x 2160 resolution) stills at 60 shots-per-seconds (up to 130 shots per burst), or 12-megapixels stills at 30 fps and as for the video recording department, it is capable of full HD 1080p progressive video recording at 36 Mbps or, if you like, recording a super-slow motion footage at an incredible 300 fps with a resolution of 640 x 360 pixels, and that, you can do it for straight two hours if you wish. other features include internal memory of 32GB, expandable via its SDXC/SDHC card slot, HDMI output and bundled LoiLoScope FX software (for Windows only).

all these goodies for a cool sum of $899.95 and is up for grab within this month. hit pass the jump for more images, as well as the official PR information.

At the heart of the GC-PX10 is JVC’s new FALCONBRID high speed imaging engine, first seen in JVC’s Full HD 3D camcorder, the GS-TD1. FALCONBRID is a single-chip technology with the processing power to allow the GC-PX10 to record Full HD progressive video at 36Mbps for rich, detailed images.  In addition, the camera can shoot 8.3 megapixel stills while recording Full HD video for clear, high-quality still images from recorded video.  The camera’s image sensor is a 1/2.3” 12.75 megapixel back-Illuminated CMOS sensor.

Digital still shooting in real time offers up to 12 megapixel resolution (4000 x 3000). An ISO6400 mode is available for increased sensitivity when shooting in dark environments.  Rapid-fire still shooting of 8.3 megapixel (3840 x 2160) stills is possible at 60 shots-per-second, up to 130 shots total per burst, or 12 megapixel stills at 30 frames-per-second. This surpasses the capabilities of digital SLR cameras currently available.

For super-slow motion shooting, the GC-PX10 can shoot video at 300 frames-per-second.  Image resolution is VGA (640 x 360), making it more than sufficient for online posting and viewing. But more importantly, this mode can be used for approximately two hours straight. So, to offer an extreme example, it’s possible to record an entire soccer game in super-slow motion.

Other features that will appeal to the serious shooter include optical image stabilization with JVC’s Advanced Image Stabilizer, 10X optical zoom (19x Dynamic Zoom with no image degradation when zoomed), KONICA MINOLTA HD LENS, a mode dial for both automatic and manual settings (white balance, aperture and shutter), microphone output and headphone input.