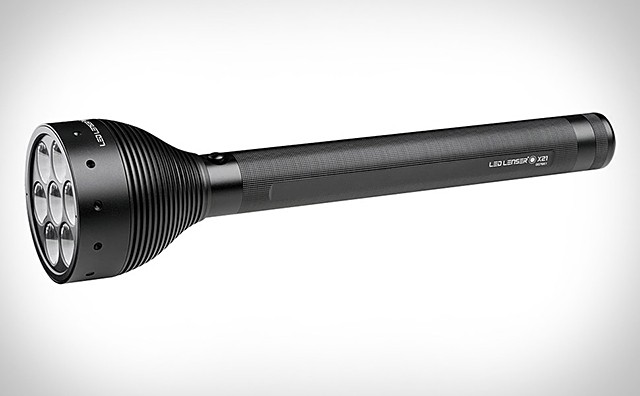 if you are in the market for a real powerful flashlight, i think your search can probably stop here. the sleek LED flashlight (some call them torch light) you see here, is the LED Lenser X21 Flashlight that is blessed with seven ultra-bright, high performance LED modules paired with seven terminator lenses to produce a blazing beam of light that would make the car headlamps look lame and that my friend, is how bright the 1,000 lumens of retina-burning light is. the advanced focus system is in placed to allow user to adjust the light cone dynamically and when tightly focused, the stream of light can reach up to an astounding 1,755 feet (about 535-meters or five and half football fields). the LED Lenser X21 is indeed a powerful flashlight and it certainly deserves appreciation and respect for the power that it wields. our eyes are particularly fearful of such high powered light as it would almost definitely hurt our delicate eyes, if not blinding them. perfect for night guards but then again, with a price tag of around €259.90 (about US$345), i think not.
[ad#Google Adsense-text-468×60]