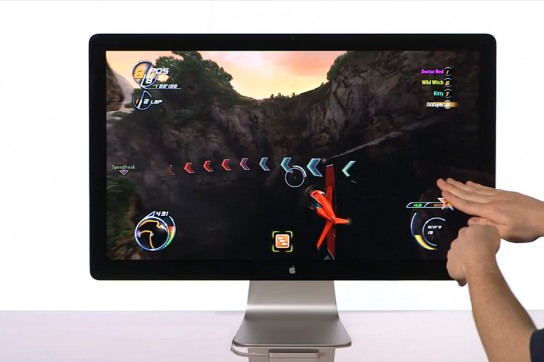 sick of tired fingers or want to avoid facing the risk of being inflicted with carpal tunnel from prolong usage of pointing devices like a mouse? how about getting both your hands to work on your computer? like gesture control? well, think of it as a la-Minority Report for your home computer and the device to make it all happen is an iPod-sized USB peripheral simply dubbed as ‘LEAP’. to be honest, when we first saw the video, the feeling was rather surreal. i mean, is it really happening? real gesture control without touching your screen? April’s fool is over, isn’t it? the thing, the LEAP is very real and you can pre-order this nifty device that will turn you into into officer John Anderton for just 70 bucks. according to its maker, the LEAP is 200 times more accurate than anything else (‘anything’ is presumably, input devices) on the market and offers tracking down to a 1/100th of a millimeter. wow. that’s like super accurate, if you ask me. all user has to do is to hook up the device via USB and it will start detecting motion within a four cubic foot space. though its maker is seeking developers to develop apps specific for it, it will also work without any special apps, which is what makes it so cool. think of it as a keyboard-mouse replacement or a magic trackpad without the physical device or a touchscreen without actually having to leaving nasty fingerprints all over your shiny gadget. don’t you just love the future? not thrilled? perhaps the short video after the break would help to elevate the excitement a little.