Completed two years ago is a building in southern city of Guiyang, a province known for its natural beauty, called Liebian International Building. There is nothing quite unusual about this skyscraper, but it is in fact the world’s biggest man-made waterfall. You heard that right. It is a waterfall, right smack in the city and as you may have already noted, that is no artificial mountain where gallons of water cascades down its side; it is a building. It is a freaking building!

The waterfall, which starts somewhere at 108 meters (354 feet) height of the 121-meter tall (about 397 feet) building, offers an impressive spectacle when it is activated. Right. We said ‘when’ because, since its completion, the waterfall has only been activated for a total of six times. The last time water fell from the building was on Sunday, on July 22, and it was only for a mere half an hour for the purpose of marking the Guiyang International Marathon.

It was indeed a sight to behold, but not without the cost which is part of the reasons it is not activate as often as many would have loved. According to South China Morning Post, while the water used is recycled from the basement storage tanks, but the operating cost of the four enormous pumps responsible for getting the water up to waterfall start point is around 800 yuan per hour (around US$117). Wow. That surely does not sounds like a very green thing.

I’d say it even contradict the idea of assimilating urban structure with the province’s image of natural beauty where natural usually means ‘green’. Anywho, it needs no math genius to know the money required to let it run like a regular fountain would be astronomical and sucking all those electricity isn’t quite as ‘green’ either. And that, btw, is yet to consider the pumps’ maintenance if they ran often and for too long.

Perhaps, the company owner could consider harvesting some energy back from the water falling? I mean, surely the impact of the water could help generates some energy which could be put back into the next run? Just a thought there… but that’s only if the waterfall operates fairly regularly, else the cost of implementation of additional equipment for energy harvesting will not be justifiable. 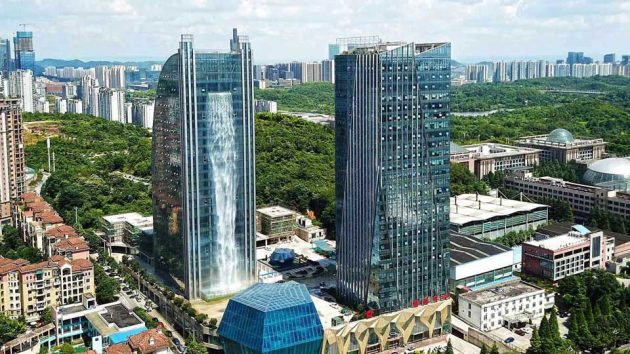