You know what’s one of the worst things that can happen to a business? To find out that the logo it uses happen to be one already been used by someone. Ok. That’s probably not the worst. The worst in this copyright infringement situation is, to find out the logo belongs to a fictional company in a popular game and movie franchise that is responsible for an zombie apocalypse, Resident Evil. Yes. The fictional company in question is none other than the infamous Umbrella Corporation. And story gets even weirder and rather, sinister because the real-life Umbrella Corporation, a Ho Chi Minh City-based Medcare Skin Centre, is a beauty-related company.

As you can imagine, it is not just copyright infringement that Medcare should be worry about; the reputation is at stake. Not surprisingly, it became a laughing stock, a joke, on the Internet. But seriously, the association is wrong on so many levels and it certainly won’t make the reputation of a company that involves in beautifying people any better. I don’t want to go as far as they has T-virus that will turn normal people into a walking dead (while in the guise as a company that deals in beauty wellness), but I just can’t shake off the association.

Then again, most of the Vietnam’s consumers will be clueless about the association anyways. So, I guess they are cool except for the copyright infringement part. Having said that, the company claim that the identical logo to the sinister company was a “coincidence” and they were “surprised” too. Here is the company’s claim from horse’s mouth posted on its Facebook page: 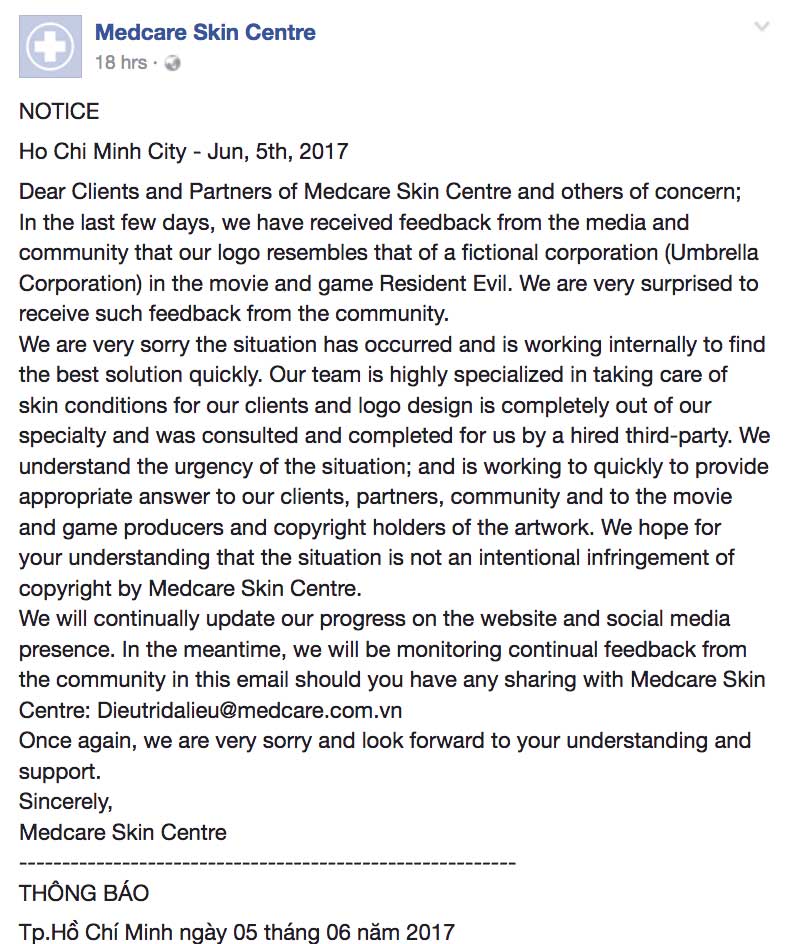 From the post, it is clear that company realized the infringement and possibly, the potential repercussion, and also, they are still pretty clueless on what Umbrella Corporation means to “beauty.” I know, Umbrella Corporation is fictional, but the association with turning people to zombies is strong and obviously, that’s not good for business. Whatever it is, it is an absolute disaster and this being the Internet age, it is destined to go viral like the T-virus. Genuine mistake or a bad blatant infringement it does not matter. What it matters is, many people had a good laugh.