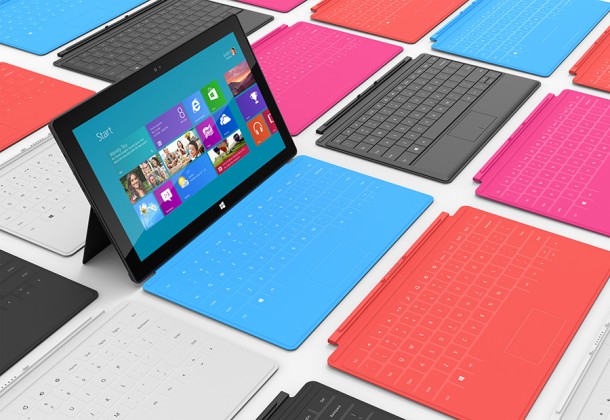 no. the Microsoft Surface is not the touchscreen table but a tablet. get it? it is beyond us as to why Microsoft decided to use the exact ‘model’ name as its oversized Surface-driven device for its upcoming Windows tablets. sticking to its favorite tradition of confusing consumers, its newly announced tablets will come in two flavors: one that runs of Windows RT and the other, Windows 8 Pro. the Windows RT version is the lighter and thinner of the two. it weighs just 676g and has a thinness of 9.3mm. despite its slender profile, it still manages to stuff a full size USB 2.0 port that can be use to charge the tablet, hook up with your USB drive or charge your mobile devices. other features of the RT model include microSD card slot, micro HD video and it will be available in 32GB and 64GB capacities. the Windows 8 Pro model, on the other hand, weighs in at a heftier 903g and measures 13.5mm thick. apart from the OS and its physical size, the Pro differentiates from RT with micro SDXC slot, a speedier USB 3.0 port, mini DisplayPort, and it will be available in 64GB and 128GB capacities. features common to both tablets are 10.6-inch ClearType HD display, 2×2 MIMO antennae, and a beautiful magnesium body that Microsoft dubbed as VaporMg. each of the tablet features a huge integrated kickstand for propping the tablet up and will come with a touch cover and a type cover, an ultra-thin (just 3mm!) pressure sensitive cover with integrated keyboard and trackpad. information regarding their availability and pricing remain cloudy at this point.