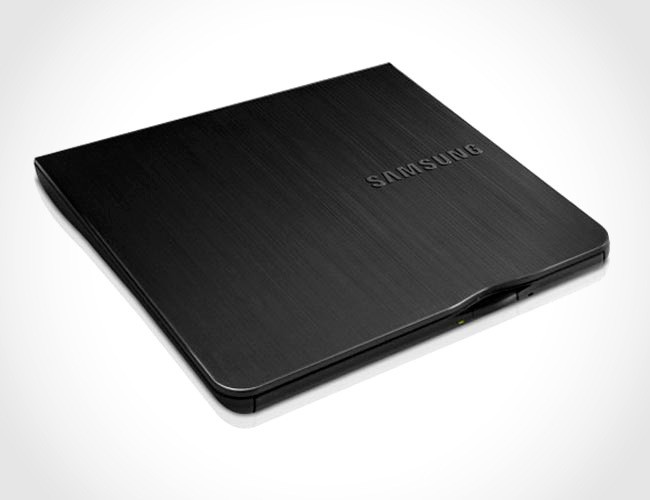 once upon a time, gadget fanatics looked to consumer electronic giant Sony as the benchmark for sleek and functional electronic gadgets but these days, it looks like Samsung is joining the ultimate sleek gadget altar too. don’t believe? then find me a company that bothers to make an item as mundane as a SD card beautiful. none, i supposed but that’s exactly what Samsung did and it is not going to stop this beauty gadget assault anytime soon and the latest to join the gadget beauty pageant is the SE-218BB external optical drive. needless to say, as suckers for beautiful objects, we are totally sold even without reading its specs. touted as the world’s thinnest optical disc drive that measures just 14mm thin, it is designed to complement the ultra thin ultrabooks running on Windows or Mac, as well as Android tablets that have full size USB port and running on Android 3.1 Honeycomb or higher. in case you are not entirely distracted by its look like we were, here’s the read/write specs to expect from the SE-218BB: 24x CD-ROM, 24x CD-RW, 8x DVD±R, 5x DVD-RAM, 6x DVD+R Dual Layer, 6x DVD-R Dual Layer, 8x DVD+RW, and 6x DVD-RW. the Samsung SE-218BB Optical Disc Drive is available now via Samsung’s online retailers for $59.99 a pop.

via Geeky Gadget via TFTS