we are all familiar with iPhone or at least aware of its existence, but have you heard of an ePhone? though not the official namesake, there is in fact such a device and it is one communication device that touts a dream two weeks of usage on a single charge – all thanks to the use of E-ink technology instead of the power-hungry colored LCD. the MIDIA InkPhone, as it is called, is from Chinese eReader maker who are apparently huge in Poland (to be honest, we have never heard of it) and it is a device that would be a perfect fit for those who craved for battery longevity or for folks who use their phone mainly for reading ebooks (who does that anyway?).

with a 4.3-inch E-ink display, you’d be forgiven for mistaking it as a tiny eReader, well, actually it is. kind of. anyhow, it is this energy saving display that’s going to give you that extra long mileage you have been dreaming of, but apart from that, do not expect anything range-topping. under the hood, it has a 1GHz processor from Rockchip System on Chip from fellow Chinese firm, backed by a modest 512MB of RAM, 4GB of storage – expandable via microSD card and a 1,800 mAh battery which the phone will slowly savor over the course of two weeks. it runs on the monochrome version of Android 2.3 and obviously, it won’t have cameras.

if eReading takes priority over calling and other regular smartphone activities, and you don’t mind the inherent low refresh rate of E-ink display, then the Onyx MIDIA InkPhone might just be the right match for you. expect it to cost around €140 (around US$194) when it lands in Germany and Poland next month. we heard it will be available from Amazon too. 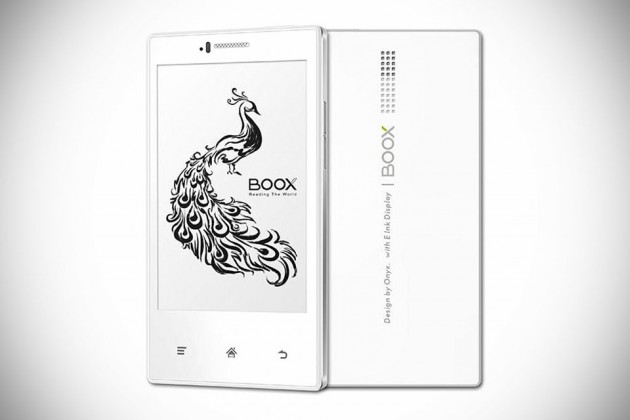 via Engadget via Stuff