Well, this one is going to make Ken looks like a wuss (not that he isn’t anyways). The dudes over at YouTube channel Grind Hard Plumbing Co has turned a Power Wheels Barbie Ford Mustang into a crazy ride that will most definitely win the world famous plastic doll with unrealistically proportional body shape the fastest doll ever. Unfortunately, Barbie won’t get to ride it. In fact, we are glad that she can’t. We don’t wish to be seeing Chucky on the loose.

Anywho, I am tempted to tag this as a kiddie ride, but the truth is, it is kiddie ride no more. Underneath that pink Ford Mustang shell now is a suspected home built Go-Kart picked up from Craigslist and in place of the 12V battery powered drivetrain is a 240-cc single-pot air-cooled 4-stroke motor pulled from a Honda CRF230 dirt bike – built with a performance cam and big bore kit to boot. The combination of a pink kids ride-on toy and powerful motor already sounds a like an exciting prospect and judging from the video, it appears to be so. Like, seriously lots of fun. 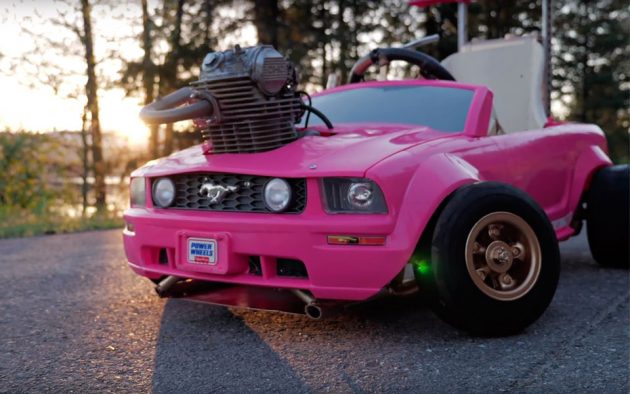 The result is an open-wheel Ford Mustang that does pretty crazy drift too. We love the look despite it being pink and we love the tiny shifter too. As it turns out, Grind Hard Plumbing Co aren’t the first to shove a real engine into a Barbie’s ride; someone else did it too with a Power Wheels Barbie Jeep, but for some reasons, Mustang seems a hell lot more impressive.

Perhaps, it was the claimed stats that wowed me. It was said that this adorable beast here makes 72 mph, does 0-60 in 6 seconds and makes the quarter-mile in 16. Yikes. If all the claims are accurate, then it is faster than most cars on the road and this is not even a real car! Impressive.

Here, have a look at it in action: