Our impression of icebergs are, they are of irregular shape, or so we thought. It turns out that nature is quite an architect herself with the ability to create impossibly geometric icebergs too, such as the one you see here. That’s right. That flat piece of white object with almost perfectly straight edges is an iceberg. It is so flat and perfectly rectangular that it looks like it has some kind human intervention, but in reality, that was the nature’s work. 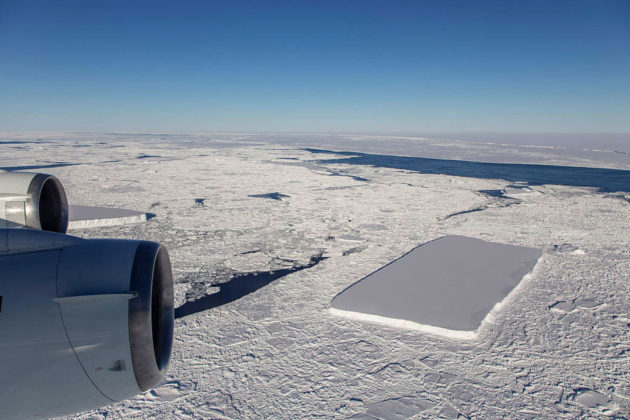 This type iceberg is known as tabular iceberg which, though rare, it is not unheard of. However, this recent tabular iceberg might be one of the straightest ever. Anywho, tabular icebergs are characterized by unusually flat top, steep sides, and often, massive size. Speaking of size, tabular icebergs can be super big, spanning hundreds of miles across and reaches hundreds of feet below the surface, and so, this one here did not awe us by size, but its incredible geometric form sure blew our mind.

While what’s visible appeared to be rectangular, what we witnessed is literally just the tip of the iceberg since only 10 percent of its mass is above the water. Therefore, there’s no telling if the rest of it that is submerged is also this geometrically perfect. Personally, I would doubt it is. If it was, it would be truly freaky.

Anywho, this particular piece is one of two spotted by NASA scientists in Antarctica on October 16 during an IceBridge flight and it is said that it was split from Antarctica’s Larsen C ice shelf which, according to the scientists, should be a recent event judging on the relatively smooth edges and pristine condition. Now that, my friends, is the wonder of nature.

From yesterday's #IceBridge flight: A tabular iceberg can be seen on the right, floating among sea ice just off of the Larsen C ice shelf. The iceberg's sharp angles and flat surface indicate that it probably recently calved from the ice shelf. pic.twitter.com/XhgTrf642Z