As one of biggest festive season draws close, China major central bus and train stations are now flocked with human traffic trying to hop on the next bus/train back to their home towns. It is also a potential period when on-the-run criminals will leverage on to get out of town unnoticed. This means, it is a good time to nab them at these major transportation hubs. While the opportunity may have present itself, humans have limited capability in identifying fugitives, but thanks to advanced facial recognition technology, the police stationed over at Zhengzhou East Highspeed Rail Station in Henan province will be have it way easier.

Instead of squinting their eyes all day long, trying to pick out who may be the suspect who’s on-the-run, they are donning high-tech face recognition eyewear to help them ID criminals. Like many wearable tech of such nature, it is equipped with an onboard camera which, according to a post by People’s Daily China, will make identification as easy as taking a look at the person. This law enforcement-exclusive tech is specifically developed to ID fugitives, as well as spotting fake IDs, and it has so far proven its worth. According to a report, as of February 5, these high-tech eyewear have helped police to identified seven people suspected of human trafficking and hit-and-run accidents, and no less than 26 person were caught using fake IDs. 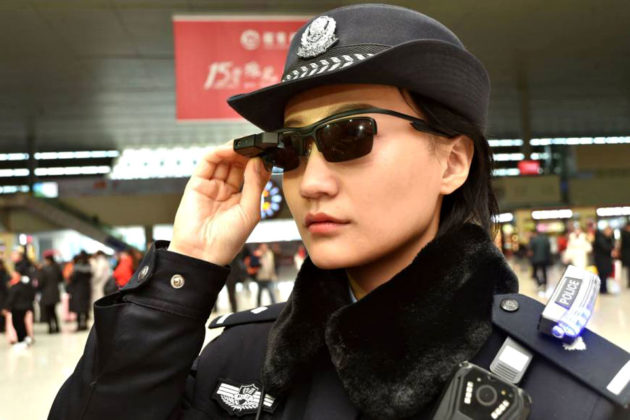 This is the part where things get a little murky: it is not clear if the glasses can pick out a person from the sea of people walking past right away like we have seen in some dystopia movies because, in another report, it did mention that it (the high-tech eyewear) is linked to a tablet-like device and therefore, we are not sure if the glasses are being used to take suspect images and matches with the suspects’ mugshot available on the police database (as reported by Japan Times), or can it immediately picked out the suspect by comparing the scan with the database on-the-fly. If it is the latter, then we have to give it to the processing power this eyewear/tablet combo possesses, and also marvel at the superb connectivity China has because, it is likely required connect to a database.

In any case, this high-tech glasses will be able to pull up the person’s information, including name, ethnicity, gender, the last known address, and whether or not he or she is on-the-run from the law. Now, here’s where some people may feel uncomfortable because, everything about them could be reveal to the police even if they are not criminals. Those are not even it. The system is also able to detail the hotel address, if they are staying in one, and even show a record of their Internet usage.

Oh, wow. I am totally impressed and at the same time wary of being watched all the time. On one hand, I yearn for technology like such that will help police quickly apprehend criminals, but on the other hand, I am concern about how privacy may be at risks. That being said, you know this is not going to happen in democratic west societies and for now, it China seems to have taken the dystopia approach quicker than developed countries. It is much like gun laws. You have to choose either freedom (and putting faith in your government), or demand for freedom and accept the bad that comes standard with freedom. That’s the dilemma in life, as always.