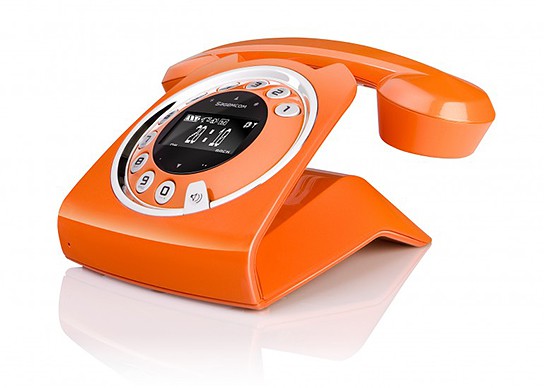 in the age of mobile telecommunication, we hardly raise an eyebrow for a fix line phone, let alone a cordless phone. here’s one item from French firm Sagemcom that’s a retro-ish fix line cordless phone with a 21st century twist that will put a smile on fix line phone users and people who are into all things retro. warning: retro-purists may not find it amusing.
[ad#Google Adsense-text-468×60]

dubbed the ‘Sixty‘, the phone resembles the 1960s Bakelite telephone but instead of the rotary dialer, it has tactile number keypad and at the center, sits a capacitive touchsceen that’s also a digital clock. however, the retro-similarity stops at the styling, as the Sixty is totally a 21st century telecommunication device. it is packed with features such as hands-free calling, caller ID display, 150 name and number phone book, phone conferencing, multiple language support, and an integrated digital answering machine.

instead of the usual ‘ring ring’ tone, this modern iteration of the yesteryear phone has modern polyphonic ringtones but for those who hold so dearly to the past, there is also a reproduction of the original ‘ring ring’ tone. other features include rotating lights and sound effects during dialing, and because it is a cordless phone, the Sixty does not have the familiar curly coil cord. all these modern day features are packed into a slim folding design form factor in a retro-ish orange paint job.

the Sagemcom Sixty Cordless Telephone retails for £99.99 (US$) and are available via Firebox.