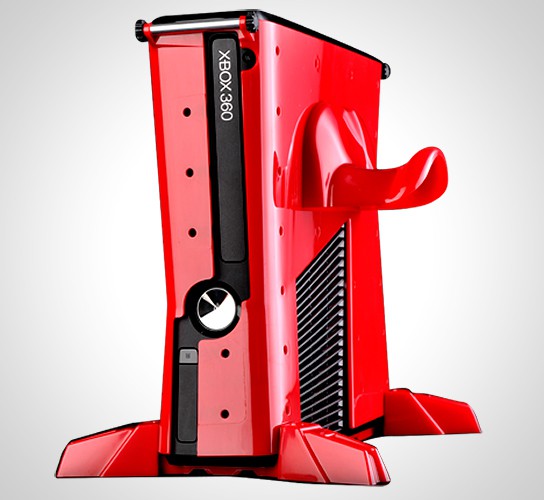 designed specifically to spruce up your otherwise monotonous-looking XBox 360, the Calibur11 Base Vault not only gives your XBox a striking, handsome look but it also elevates your console, thus enabling better cooling thru better air flow. makes sense as i bet most XBox 360 gamers would likely to put their consoles thru extended hours of game play.
[ad#playasia-2]

another features of this irresistible ‘vampire redk’ (that’s not a typo, Calibur11 called it ‘redk’ for ‘red’, i guess) enclosure is the extended feet that adds stability for your vertically standing XBox 360. other features include a nifty holder to rest your controller when not in use. as you can see from the image after the break, the enclosure still allows full access to the ports of the XBox 360. very industrial, indeed.

the Calibur11 Base Vault cost $59.95 a pop and are available from Caibur web store. also available in Villian Black, Gundam White, Grayzilla, Urban Blue, Nuclear Green and an officially licensed MLG design ($89.99) that features a LED light up apocalypse head.