How many times can you say your pen is also a toy? And nope. Twirling your pen does not count. So, I guess it is a no? However, in the case of the S.T. Dupont Star Wars X-Wing Rollerball Pen, the pen is indeed a toy, or if you will, a scale model. Interesting notion there. I wonder what struck S.T. Dupont’s designers to come up with this novel pen. Obviously, no person can write comfortably with a pen that has a form of a X-Wing Fighter. Me would think it will be impossible to hold. 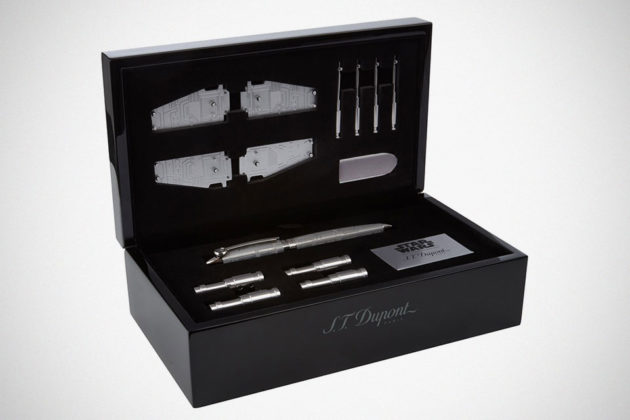 The X-Wing is thoughtfully designed to be taken apart, so you could use the pen, which also happens to be the fuselage, as a proper writing instrument. When you are not using it as a pen, you can put the 13 pieces of engraved guilloche parts together to show case the pen. This particular piece is actually a few years old now. It was released years ago to celebrate the seventh Star Wars film, The Force Awakens. But being an officially licensed Star Wars merchandise, it will never be too old or dated.

Comes with a black lacquer wooden box with suede interior for both the luxe look and also to prevent marring the pristine silver-tone finish on the ceramic A.C.T that it is made of. It may be over two years old, the price has not budge a bit. In 2018, this baby here will still run you back at a bank-breaking $1,851.47. That’s like a month pays for someone. That being said, I guess it is more suited as a display piece, within a bulletproof glass cabinet.