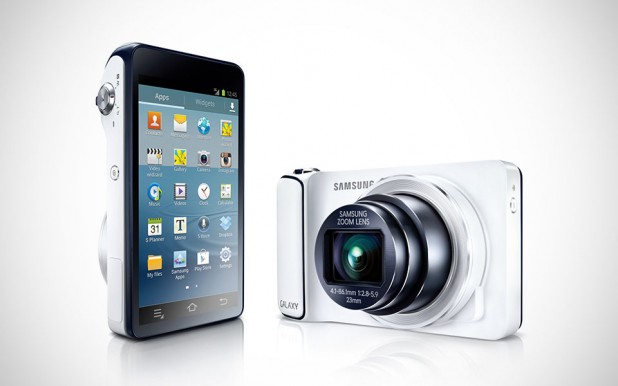 so you dreamed of having your smartphone’s photo apps on your everyday point-and-shoot camera? well, we have a good news for you: it will be a commonplace in no time. the latest to join the Android camera bandwagon is Samsung with its, you guessed it, Samsung GALAXY Camera. powered by Android 4.1 Jelly Bean and driven by a 1.4GHz quad-core processor, the GALAXY camera features a 16.3-megapixel BSI CMOS sensor, a 21X super long zoom lens, a large 4.8-inch HD Super Clear Touch Display, ISO up to 3,200, 8GB onboard memory, microSDSC/SDHC,SDXC card slot, HDMI-out, A-GPS (and GLONASS), WiFi (including HT40), Bluetooth 4.0, and the other major highlight of this smart camera: 3G or 4G connectivity for sharing and browsing of photos virtually anywhere without the need to be tied to wireless network. additionally, the GALAXY Camera comes with a full suite of Google Mobile Services, including Search, Maps, Gmail, Talk, YouTube, among the many others while Google Play opens up to a world of more apps, further enhancing your imaging experience. basically, the only thing that it can’t do is to make calls. oh, there is also an ‘Auto Cloud Backup’ feature that automatically backup your images to the cloud via Samsung’s AllShare the moment they are taken. the Samsung GALAXY Camera will be available in two connectivity options: a 3G + WiFi and a 4G + WiFi model. no word on when it will be officially launch, and the same goes to its pricing. in the mean time, shoot past the jump for a few more look at the Samsung GALAXY Camera.