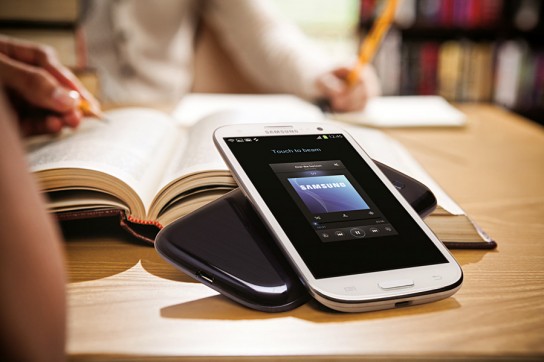 Samsung’s smartphone may not have received as much speculations like the iPhone but that doesn’t make them any less desirable, especially when they now sport a trend-setting mega big mobile screen size. meet the newly announced Samsung GALAXY S III smartphone. powered by a faster quad-core processor and sporting an eye-watering 4.8-inch HD Super AMOLED touchscreen display, the S III focuses more on software advancements and usability than hard specs. key features include Android 4.0 Ice Cream Sandwich, a 8.0-megapixel auto focus main camera with flash, a HD-capable 1.9-megapixel front-facing camera, a full suite of Google Mobile services (Gmail, Google Talk et cetera), 16/32 GB memory with 64GB coming soon, microSD slot (expandable up to 64GB), and a host of sensors that include accelerometer, RGB light, digital compass, proximity sensor, gyroscope and barometer. connectivity comes in the form of Bluetooth 4.0, WiFi (with channel bonding allowing for double the bandwidth), GPS, as well as Near Field Communication (NFC). other highlights include:

Smart stay – the front camera is used to identify that you are viewing the phone and thus, maintaining a bright display instead of dimming out.

Direct call – when in the text messaging mode, lifting the phone to your ear will activate the ‘Direct call’, initiating a call to the number of that particular text message.

Smart alert – you will unlikely to miss any unread messages with this feature. the phone will vibrate to notify missed statuses when picked up after being idle.

S Beam – expanding upon Android Beam, it allows sharing of files with another GALAXY S III phone, even without a WiFi or cellular signal.

the Samsung GALAXY S III will be available in the Europe market come end of May, after which the rest of world will have their hands on it. hit the jump for a few more larger views.