2018 will come an end next month and you know what that means. This means that Christmas is upon us and everybody businesses, big and small, is banking on the season of buying, and Dodge is no exception. As the matter of fact, it is quick on drumming up the festivity, starting with a commercial called “Upgrade,” starring the mythical Santa played by former pro wrestler Bill Goldberg and a team of elves. Anyways, as you might have expected, the ad has Goldberg’s Santa looking at his old sleigh (after a grand WWE/WCW entrance) and proclaims “it’s time for an upgrade.” 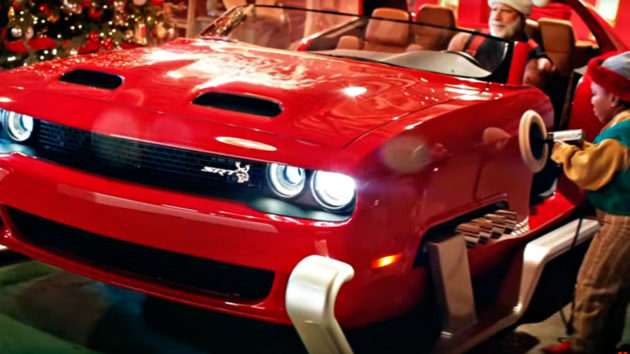 Subsequently, the elves get to work and presented an one-off sleigh, an open top Dodge Challenger SRT Hellcat Redeye with skis in place of wheels, a half-height windscreen, side exhausts and no doors because, sleigh. And oh, in place of the Redeye logo, which is a cat with bejeweled eye, Santa’s Dodge Challenger SRT Hellcat Redeye Sleigh gets a reindeer version.

Clearly, Santa Dodge Challenger SRT Hellcat Redeye Sleigh is self-propelled and that kind of puts the Rudolf and gang into early retirement. But that’s just a fantasy cos’ unless the sleigh is jet engine powered, there is no way a pair of skis will make it move forth, much less fly. But hey, it is Santa’s world and so, I guess anything is possible. Skip ahead for the said commercial.