Or probably not, because this aptly named SnowMonster by Swedish Lindberg Bros Motorsports makes more than just a ding. There is no familiar and ear-friendly ring, ring, ring chimes. There is only the unmistakable growl accompanying the big block unit with some 500+ ponies which would have drown out old Santa’s signature “ho, ho, ho” anyways. Fantasy and folklore aside, the SnowMonster is something to behold even after two years since it first surfaced. The Swedish drag racing shop marries a Volvo Duett Chassis with a vintage 1920s Model T body and then packed it with a Chevy 7.4L V8 big block that yields somewhere between 550 to 600 horses. This monster powertrain is mated to a Chevy TH 350 automatic transmission with Hurst shifter, putting the immense power to a set treads borrowed from an Arctic Cat Lynx snowmobile. 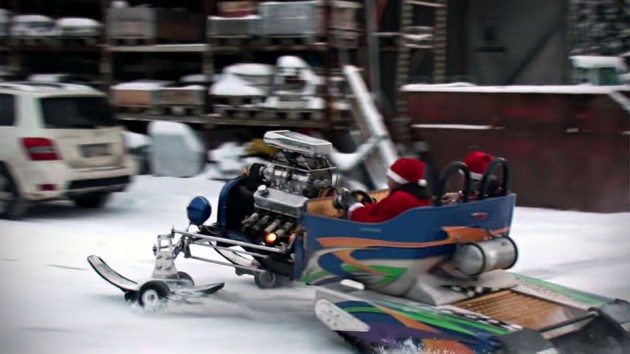 It is no doubt a crazy contraption and one that could only be dreamt up by a family who drags autos down the straight at 268 mph, making 0-60 in less than you can read ‘second’ and who are surrounded by lots and lots of white powder during winter season. Well, it kind of makes sense. You can’t really drag race in the winter, so why not make one that cuts the snow? Santa would probably be apprehensive about taking this sleigh out for his chimney duties. A spin in a non-Santa outfit when off-duty, perhaps. In any case, it appears that Lindberg Bros did not provide a trunk for Christmas goodies, but hey, at least it sits two, which means Mrs. Santa can come along too.