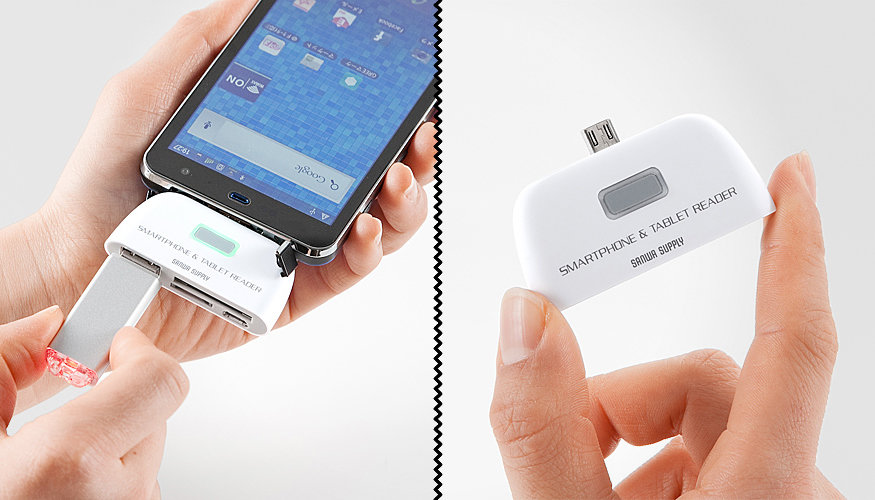 until the day concept camera like the Polaroid SC1630 Smart Camera become a reality, we still need to transfer our digital snapshots to bulky equipment like the laptop for sharing and editing, which is not exactly an ideal scenario. since most of us have our mobile devices such as smartphones and tablets with us, wouldn’t it be nice if we could transfer those snapshots that we have taken 60 seconds ago into them, edit it and share it? the Sanwa USB Card Reader for Android Devices you see here lets you do exactly that – all thanks to the enhanced USB host mode found in newer Android devices. the Sanwa USB Card Reader features a SD card slot that accept SD and mini SD cards, a micro USB card slot, a regular size USB port (rated 100mA of power) and a micro USB port. the use of this nifty device is wide and varied, which ranges from read/write from/to SD cards and USB flash drives or mass storage devices, to hooking directly to a digital camera and input devices such as mice, keyboards, game controller and even portable scanners. though it is worthy to note that this ¥3,280 (about US$39.90) gadget works with limited Android devices (at least for now), including Samsung Galaxy II, Sony Xperia NX SO-02D and acro HD IS12S, Toshiba REGZA T-01D Smartphone, and Sony S-series tablets. with new devices adopting the new enhanced USB host mode, we have no doubt it will also work with future Android devices. more look follows after the break.

via Technabob via Everything USB