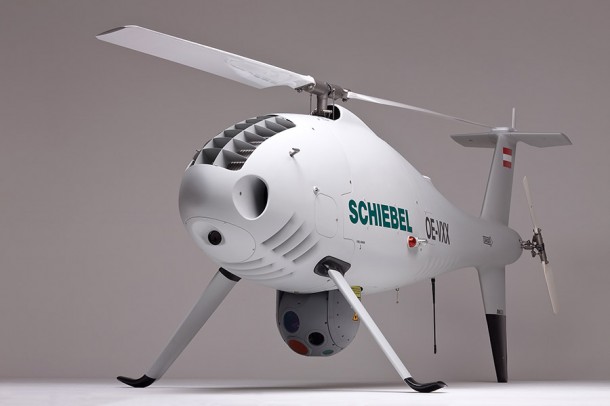 thinking about going serious in your movie-making career? then perhaps, the Schiebel CAMCOPTER S-100 UAS could be an worthy investment. this Austrian-made unmanned aerial vehicle is not new but despite its military intend, it has recently proven itself that it is equally capable for a more peaceful role, such as getting a video rig up into sky to capture glorious, crisp and stable aerial shots for entertainment purposes. this unmanned air system, as Schiebel has called it, was integrated with CINEFLEX camera, a gyro-stabilized cinematography camera and had successfully executed a few days of shoot over in Austria. its ability to hover and maneuver for extended period of time makes it an ideal, stable platform for aerial cinematography – a proposition that would eventually give real helicopter pilots a run for their money. the S-100 offers dual navigation options, which include pre-programmed GPS waypoints or direct control via a pilot control unit. in this recent aerial shoot directed by Brain Farm Digital Cinema and Snaproll Media, the aircraft was able to capture fully stabilized high quality images despite being assaulted by high wind speeds of up to 24 knots. other specifications include a range of between 45 to 180 km (depending on antenna chosen), 50 kg of payload, maximum ceiling of 18,000 feet and 130 knots of maximum airspeed. honestly, we are not sure how much this sleek UAS would cost but it can be safe to assume it will be pretty hefty. so then why are we posting this? we will be frank with you: we love this aircraft for what it can do and its awesome beauty, plus we are certain that there are some of you folks out there who are ready to become the next Christopher Nolan or Steven Spielberg. as for the money necessary for such investment, you will have to find your own means and ways. we invite you to join us for a gallery and a video of it in action by Brain Farm Digital Cinema after the break.