Sometimes, geological changes caused sink holes to form under lakes which result in water being drained away. A lake in California leverages on this hole-in-the-water phenomena to drain off excess water in Lake Berryessa in Napa County and direct them to behind the dam. So, what have all these have to do with Seabin? Well, nothing, actually, except that it is seaborne trash collecting device that is based on the same principle of when water meets a hole. 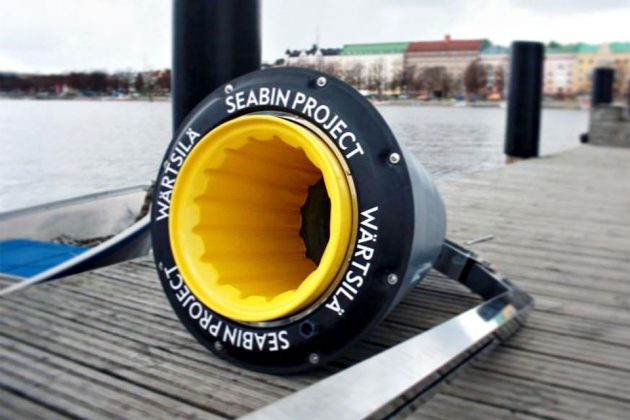 When there’s a hole in the water, the water gets into the hole and thereby bringing along whatever debris that maybe floating on the water. But, sometimes calm water alone is not enough to ‘draw’ trash towards the Seabin and therefore, this brilliant trash collector has a 12V submersible pump, which can be powered by a variety of sources, to help pull water into it. When the seaborne-trash gets into it, they are collected inside a catch bag while the water returns into the sea.

Information on the catch bag is scant, but from the looks of it, it is semi-permeable, which means water can pass through it while trash and tiny bits of debris remains within and apparently, the bag is disposable. Seabin is a brilliant idea to prevent marinas, ports and similar areas from piling with floating trash, but as you can imagine, it is does not move like the Waste Sharks do, and hence it has limited reach and the capacity leaves much to desire too.

However, the idea behind Seabin is not solely designed to pick up garbage from the sea. It is part of a greater plan of educating people about the oceans and the environment. Having said that, I can never comprehend how some folks can simply drop their trash wherever, oceans included. Seriously, I can never make myself do that, ever. I don’t know. It just feels super weird to be throwing any rubbish outside of a trash can. If you do that, please stop. I always keep any rubbish I have inside my bag or pockets until I find a proper receptacle for them.

Anywho, Seabin was a successfully crowdfunded project from a few years ago and it is now being trialled in some ports across Europe and if all goes as planned, it will eventually become a commercial product projected to cost around £2,500 (roughly US$3,200) each.

Edit: The catch bag is made out of hessian fiber, otherwise known as burlap and it is totally biodegradable. Also, Seabin is made out of recycled plastics.

The Seabin Project via Tech Insider.