If haven’t already heard, SEAT has split out CUPRA model to be an independent brand – probably as a show of its resolution in turning out performance rides. The first vehicle to bear the CUPRA badge is Ateca, a sporty SUV that, unlike most SUV, is no slouch in the performance. With 300 PS (about 296 horses) from its 2.0 TSI motor, the CUPRA Ateca has well over 100 horses over SEAT Ateca which, coupled with SEAT 4Drive traction system and a new 7-speed DSG gearbox, allows it wipe the century sprint in just 5.4 seconds and reach an un-SUV top speed of 152 mph.

Speed is not all it has to offer; it also has a newly designed Otto Particulate Filter System for a cleaner emission, adaptive suspension (Dynamic Chassis Control) setup, and a look that’s unlike the run-of-the-mill SEAT Ateca. Some of the exterior cosmetics include the obvious CUPRA branding, glossy black elements, welcome light that shines the CUPRA name and logo onto the ground, powerful black brake calipers, a sporty rear bumper, quad exhaust pipes nested in the rear diffuser and exclusive 19-inch diamond-cut alloy wheels, complete with CUPRA logo all around, of course.

In the same announcement, CUPRA also revealed the CUPRA TCR, the brand’s first racing car that will be competing in the 2018 season of the TCR series. But nothing catches our attention more than CUPRA e-Racer introduced at the recently concluded Geneva Motor Show. Billed as the world’s first 100 percent electric racing touring car, the Cup Racer-based CUPRA e-Racer is capable of delivering over 400 HP of continuous power and up to 670 HP at its peak, and features a single gear (in other words, it has no gearbox like most EVs) with torque vectoring and rear wheel traction which enable it to make the century sprint in 3.2 seconds and another 5 seconds, it would have hit 200 km/h (124 mph) mark and on its way to a top speed of 270 km/h (about 168 mph).

Interestingly, this striking, green-tech racer also feature a new three-camera rear vision technology that replaces the traditional rear-view mirrors and display what’s behind directly within the dashboard. It is not clear if the CUPRA e-Racer will take part in any racer in 2018, but SEAT said “specially chosen events will showcase the CUPRA e-Racer,” and it will probably enter a competition for electric touring cars in 2019. That said, from here on and out, CUPRA will be taking the all the responsibilities and work previously handled by SEAT Sport. So, yeah, it is like the performance brand of SEAT, like AMG is to Mercedes-Benz. Kind of. 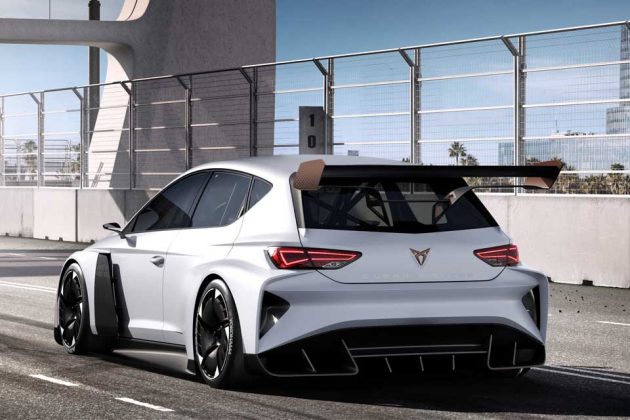 In case you are wondering, though CUPRA is officially a standalone brand, the name is still very much alive in SEAT lineup, or at least it is for now. During the 88th Geneva Motor Show, SEAT also lured the crowds to its new SEAT Leon CUPRA R ST. Quite a mouthful, if you ask me, but anyways, the compact sport ride from the Spaniard automaker stands out with a 300 PS 2.0 TSI engine, 4Drive total traction system, and a DSG gearbox, copper badges, exclusive 19-inch wheels wrapped in Michelin Pilot Sport Cup 2 rubbers, Brembo brakes (front), carbon fiber elements, dual exhausts – just to pick out a few. And oh, there’s, of course, SEAT new baby, the Digital Cockpit and also, Alcantara upholstery.

Here’s the video of the official unveiling of the CUPRA Ateca and CUPRA TCR:

All images courtesy of SEAT.