There are two major types of recreation traveler. One type travels because of the destination and another travels because of accommodation. If you are latter, then I am pretty sure you will want to check out this hotel in Shanghai, China, Shimao Wonderland InterContinental Hotel, AKA Songjiang Quarry Hotel. As its alternate name suggests, it is a hotel, the world’s first, to be built inside a 88 meters (289 feet) deep underground, water-filled quarry. 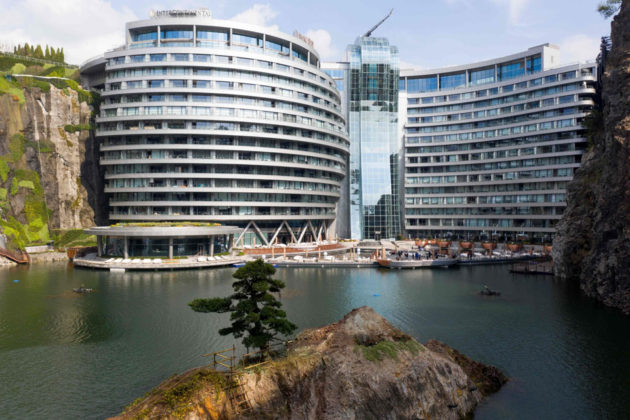 The 18-floor hotel is built into the side wall of an abandoned quarry located 20 miles (302 kilometers) from Shanghai in the town of Songjiang and boasts a green rooftop, two above ground floors and 16 subterranean floors, including 2 floors that are underwater. Each guest room above water room has a balcony attached and offers a breathtaking view of the quarry while the rooms and a restaurant under the water line faces a 33-foot-deep (10 meters) aquarium. 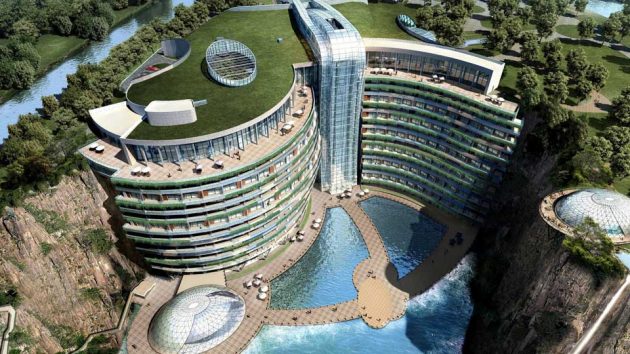 Also located below the water line is a leisure complex, swimming pool, and water sports. There are underwater public areas too, along with the requisite conference facilities for up to a thousand people. Interestingly, the hotel also boasts an extreme sports center where guests will be able to participate in rock climbing and bungee jumping – something not many hotels can say they have. 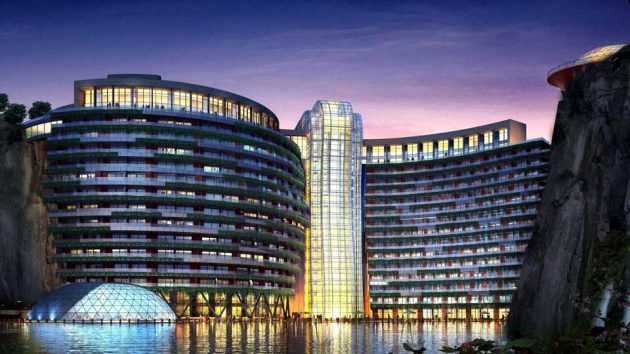 The hotel is kind of a big deal not just because it took 12 years to built and it is located in a unique location, but it is also because the hotel is designed in such a way that it will help to prevent further damage to the environment surrounding it. How so? Well, the hotel apparently leverages on the geothermal, as well as solar energy to generate the power it requires for heating and lighting. 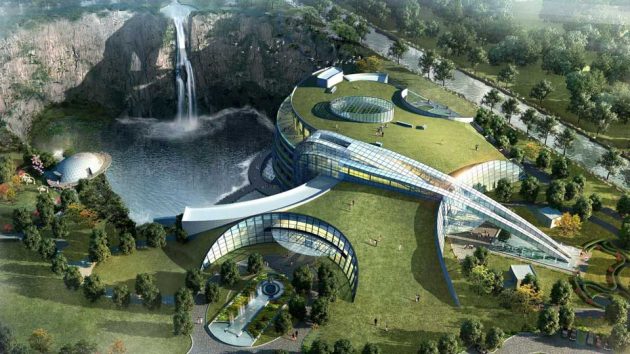 While we applaud the ecological-friendly efforts, we are more impressed by overall picture (like quite literally). The sight of a modern architecture marvel integrated into the natural elements like rocky cliffs, waterfalls, and surrounding hills, is nothing less than a sight to behold. In comics speak, it feels very much like Wakanda, but in China, if you get my jive.

All told, the 330+ rooms hotel took over 5,000 architects, engineers, designers, and works to construct. Shimao Wonderland InterContinental Hotel is originally expected to be opened in “late 2018,” but last checked, it appears to be in operation with the hotel’s website already accepting online reservation for the rooms. It is not cheap. I tried to make a book and a standard room is reflected to be around 3,000+ yuan, which works out to be around 400 plus USD.