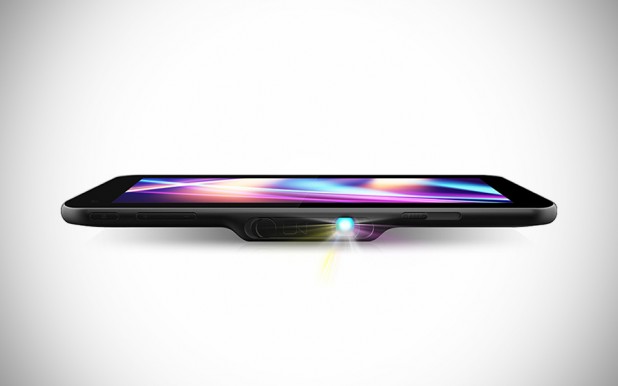 so you have tons of movies loaded into your sleek tablet or even some business presentations but to share them with a crowd, the tablet screen size is barely enough, less its a 21.5-inch behemoth tablet but then, that won’t be exactly portable, would it? Chinese electronics maker, SmartDevices have a sweet proposition, a tablet with a pico projector built into it. the SmartQ U7 tablet features a 40 lumens advanced DLP pico handheld projector sourced from Texas Instrument that is capable of projecting up to 50-inch image with 854 x 480 resolution at about 6 feet away. at its core is a 1GHz TI OMAPP4430 or a 1.5GHz OMAP4460 Cortex-A9 dual-core processor with 1GB of RAM and powered by Google’s Android 4.1.1 Jelly Bean. other features include a 7-inch IPS capacitive multitouch display with 1024 x 600 resolution, up to 16GB of internal storage, microSD card slot that support up to 32GB, a 2.0-megapixel front- and rear-facing camera, and a 4,800 mAh lithium polymer battery good for up to three and half hours of projection duty. apart from those, you will find the usual servings of 3.5mm audio headphone jack, built-in mic, mini HDMI out, WiFi and Bluetooth connectivity, as well as micro USB port. no word on when it will be made available but SmartDevices have put a price to it: the standard model with 1GHz CPU and 8GB storage will retail at 1,999 RMB (about US$320), while the deluxe model with 1.5GHz processor and 16GB of storage will goes for 2,499 RMB (roughly US$400). click through for a few more look.