we won’t argue the fact that Apple is still among the top in product design, but there’s just one slight problem: sleeker and slimmer products means the lack of ports and interfaces, and also, on the contrary to the Cupertino folks’ believe, optical drives are still very much needed, and hence we still need them from time to time. the solution? hook up your Mac with a myriad of I/Os with the Sonnet Echo 15 Thunderbolt Dock. easy. though it kind of defeat the whole purpose of being sleek and slim, but that’s besides the point. anyway, what the Sonnet Echo 15 offers is to give you more ports and I/O options which happens to include four USB 3.0 ports, four SATA ports, Gigabit Ethernet port, FireWire 800, pass-through Thunderbolt port, a mic jack and an audio headphone jack, an optical disc drive, and an internal hard drive bay that can accommodate either a 2.5-inch SSD or a 3.5-inch hard drive. it comes with a built-in DVD drive as standard, or it can be ordered with a Blu-ray BD-ROM/DVD drive instead if you are prepared to drop a little more dough for them. the Sonnet Echo 15 Thunderbolt Dock is expected to go on sale this summer for $399.95 for the standard issue model, or you could max out the configuration with 2TB HDD and a Blu-ray optical drive for $549.95. your choice. another look at the rear after the break. 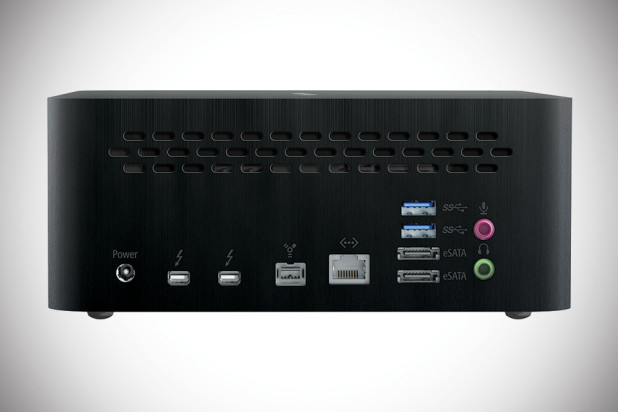