With the advancement in sound bar, there is really no reason to clutter your home with multiple speakers, and if you concur with our views, you may want to know the still-striving Japanese electronic giant, Sony, has served up two handsome examples at this year’s CES. The first being the world’s Dolby Atmos sound bar, HT-ZF9, and the second is the super compact HT-SF200. Lets start with the small one first, shall we? So here goes…

The HT-SF200 is a 2.1ch, 80W one-bar solution, boasting built-in subwoofer, S-Force PRO Front Surround that promised deep bass and wide surround sound field from an uber stylish and compact sound bar measures just 58 cm (22.83″) long. With a thickness of just 6.4 cm (2.52″) it should fit right in front of most flat screen TV without blocking the branding and the IR unit. 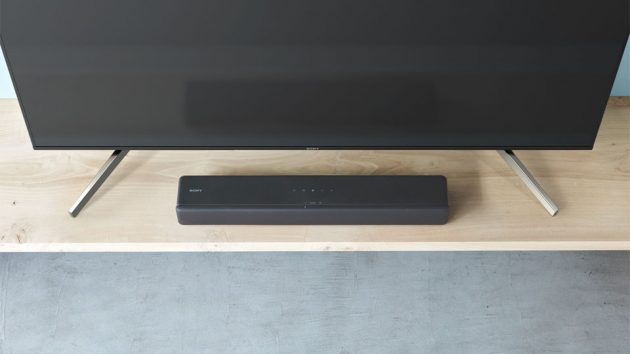 Up next is the world’s first 3.1ch Dolby Atmos sound bar, the HT-ZF9, that is designed to produce virtual, 3D room-filling surround sound from a three-speaker sound bar and subwoofer setup. Thanks to Sony’s Vertical Surround Engine, it is said that you can hear sound from above without the ceiling reflection or additional speakers. In addition to Dolby Atmos, HT-ZF9 also touts DTS:X support for an even more immersive cinematic experience in the comfort of your own home.

At the same time, Sony is also debuting the HT-9000F that has two front-facing speakers, but with the same cinematic surround sound features of Dolby Atmos and Vertical Surround Engine. Both the HT-ZF9 and the HT-9000F will be available in Spring 2018, priced at $899.99 and $599.99, respectively.