Remember the super cool SpareOne Emergency Phone that’s powered by a single AA battery? Well, it will have a little brother joining it sometime early this year. Dubbed the SpareOnePlus, it features couple of enhancements over its still-available predecessor, including location-based service for identifying the exact location of the cell ID (via a free smartphone app) and an audible numeric feedback which announces the number dialed and incoming calls aloud.

Apart from the new upgrades, the SpareOnePlus Emergency Phone shares the same features as the SpareOne, including up to 15 years of battery life when stored unused or 10 hours of talk time, a LED torchlight, a dedicated 911 dial button to alert authorities, at the ability to pre-set 9 important speed dial numbers and it is of course, SIM-unlock so that you use it with the SIM from the operator of your choice. Naturally, you would want to choose an operator that has good signal reputation, else what’s the use of emergency phone if you can barely get any signal?

Rounding up the SpareOne emergency phone package is a talk-through, resealable waterproof bag with a humidity-proof seal that’s floatable and is sealed against extreme temperatures of -30 deg Celsius to 60 deg Celsius and is capable to withstand water submersion for half and hour to a depth of one meter. With phone in, the bag still have room for other little knickknacks such as credit cards, band aids et cetera. The new SpareOnePlus Emergency Phone will be available in flat back and matte silver, and both colorways sports a new red battery screen.

NOW READ  Bluetti AC300 And B300 Power Station Combo: It Could Be The Perfect Setup For Rich Preppers And Campers 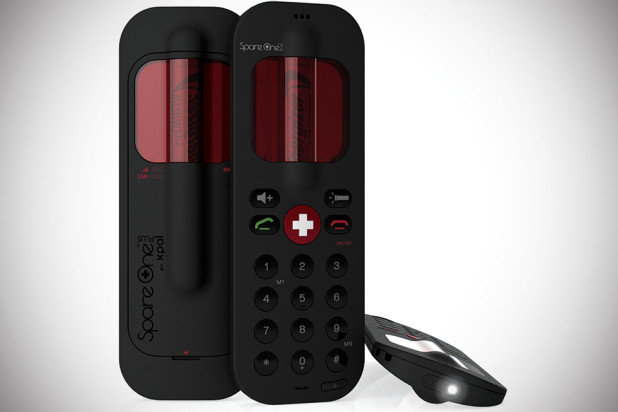