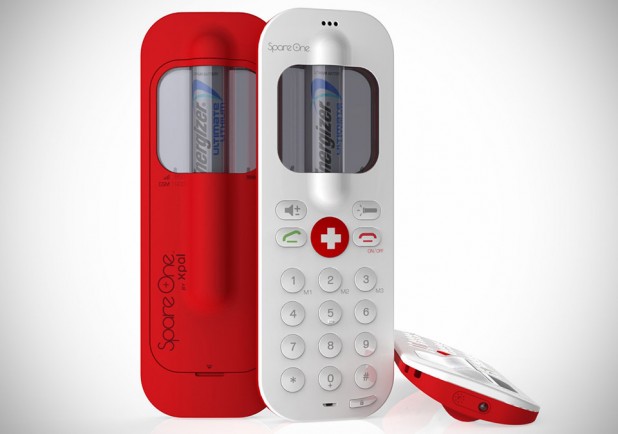 today’s high tech smartphone is cool but what if it dies on you while you out, far away from home base? in such situation, you’d be wished you have a trusty backup phone that will continue to keep you connected with the rest of the world. that’s precisely what the SpareOne Emergency Phone is designed for. it is a no-frill GSM phone that’s devoid of all modern tech wizardries which means it won’t suffer from nonsensical freezing or threatened by its insatiable appetite for battery power. in fact, a single AA cell is all it need to let you start talking again. being basic of the basic phone doesn’t mean that it has to look dorky, on the contrary, the SpareOne Emergency Phone is anything but ugly – it is a total looker. other features include 9 re-settable speed dial buttons, an integrated white LED torch light, one-button emergency dialing even without SIM card, keypad lock function to prevent accidental dialing, and a battery, antenna/network LED status light. the SpareOne Emergency Phone could be yours for $59.99 a pop – a price that includes an Energizer Ultimate Lithium L91 (installed and with isolator tab until you are ready to use), a micro SIM adapter and an iPhone PIN for iPhone users to remove the SIM for their iDevice. the latter two items are safely tucked away under the removable back cover of the handset.