Multi-talent Italian polymath Leonardo Da Vinci’s iconic painting “The Last Supper” was perhaps one of the most recreated and parodied masterpiece of the 15th century, and it can now add Steve Newman’s Star Wars version to the list. Steve, a professional photographer, has been wanting to recreate Da Vinci’s iconic painting with Star Wars, but it was only of late that he was able to realize his dream. Pooling together a few talented folks to arrive to the stunning image you see here. What made this photo so stunning was the use of real cosplayers from UK Garrison (a Star Wars cosplay group) and clever use of digital set to set the tone. For the former, Steve couldn’t have choose better characters from Star Wars to fill in the role of Jesus, Judas and apostles, which was played out by the Emperor, Darth Vader and a quartet of Stormtroopers, respectively.

Several photographs were taken and put together, and with some post-processing to result in this image which we can’t help but to steal many more looks. Pay close attention to the poses and hand positions of the characters. Those are the subtle details that made the entire image comes alive. Unlike the original creation, the table has nothing on it except for a glowing red hologram of the Death Star II (a CGI image). While we are awe by this strangely mesmerizing image, the photo has deeper a reference beyond mere visual art, as Steve explains:

“In The Last Supper, one of the apostles shown is Judas, who went on to betray Jesus. In Return of the Jedi Darth Vader finally betrays the Emperor, killing him. Recreating the painting with the Emperor in the role of Jesus and Vader as Judas meant that the photo worked not only visually, but conceptually as well, with some emotional drama as well as just a nice composition.”

Like we said, Steve choice of characters couldn’t be better. Granted that in Return of the Jedi, the messed up face Emperor Palpatine wasn’t assassinated, but was thrown into the Death Star’s reactor shaft pit by Darth Vader in order to save his son.

There’s something odd about our blog which rendered the featured image ‘blurry’, so we suggest you scroll down and hit on the image below for the larger view, or if you are up for it, hit up Newman’s site to have a peek at the behind the scene. 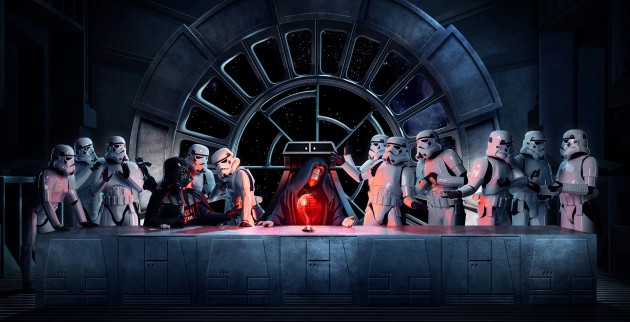 Steve Brown Creative via The Awesomer