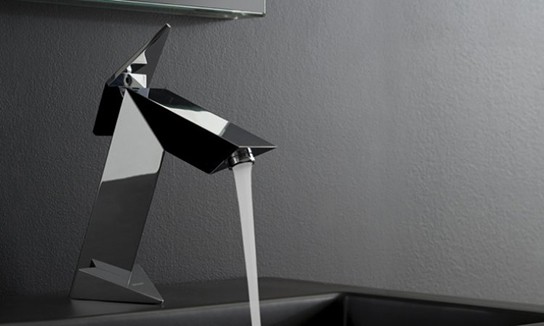 typical faucet, no matter how nice the designs are, still looks the pretty much the same. even though there are probably some square or flat items around, round and tubular constructions are still the norm. so how do you like an angular faucet that was inspired by the Stealth aircraft? yea, just imagine how the Stealth aircraft looks like and carry it over to a faucet.

well, you get an all angular faucet just like the Stealth aircraft less the stealth capability, though. we still need to see where are faucets are, don’t we? instead of the menacing matt-black radar-absorbing coating, the Stealth faucet comes in two alluring finishes: polished chrome or Steelnox satin nickel.

this awesome faucet is, not surprisingly, from award winning manufacturer GRAFF which has supplied its faucets and shower collections to many luxurious hotels and homes around the world.