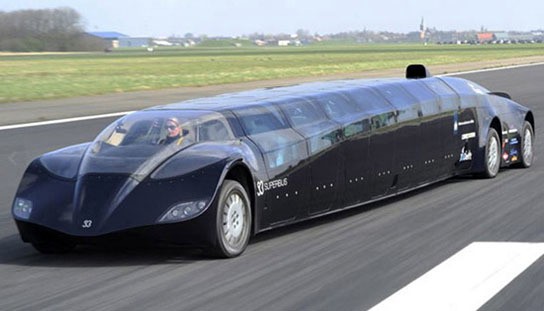 the concept of the Dutch Superbus is not a new news but this is a working prototype after three years and $18 million pumped in, therefore it is one step closer to realizing this system. or is it not? designed by Netherlands’ first astronaut Wubbo Ockels, the Superbus 50 feet length and low five and half feet height makes it look more like a super stretch limousine. in short, it looks nothing like a bus. also for the fact that it has sixteen doors for 23 passengers to get in and out, and it does allow any standing (due to its height and the speed it is capable of) like any conventional buses.
[ad#Google Adsense-text-468×60]

the Superbus is made of carbon fiber and fiberglass, and is powered by electric motors rated at 300 kW. the plan is for a dedicated road system called the Superbustrack (yes, it is one word) that allows it to reach a cruising speed of 250 km/h. some may think it as a train but it offers more flexibility than a train as it can travel on normal roads and is able to change its route whenever required. check out the video on how the Superbus system works after break.

apparently, the Dutch government has lost faith in this project, but the ex-astronaut is hopeful that investors in Dubai might pick up the Superbus concept and thus, turning it into reality. somehow i have a hunch that Dubai is the place to pitch such a mass transport system. i certainly hope becomes a reality, even though i may not be an end user of such system.