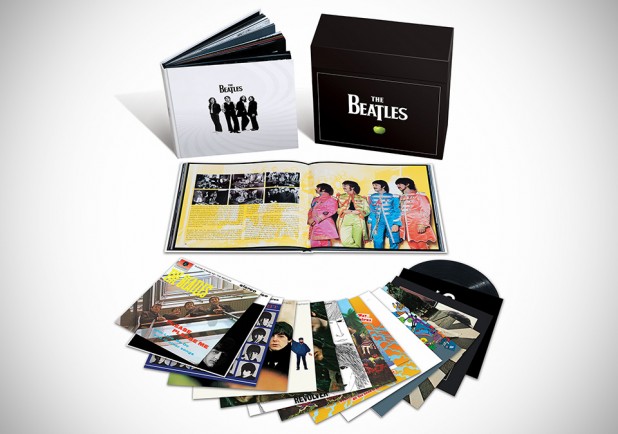 whether you are a huge fan of The Beatles or a serious aficionado of the good’ol vinyl records, the upcoming The Beatles’ Studio Album Remasters on 180-Gram Vinyl is definitely going to tickle your fancy. originally remastered and released on CD in 2009 and in 2010 for digital downloads on iTunes, the stereo vinyl edition will be hitting the stores on the November 12 in UK (November 13 for North America). the collection consists of 14 albums on 180-gram, audiophile quality vinyl with replicated artwork including details such as poster in The Beatles (aka The White Album), the Sgt. Pepper’s Lonely Heart Club Band‘s cutouts, plus special inner bags for some of the titles. the 14 albums comprises of 12 original UK releases from 1963 up to 1970, plus US releases Magical Mystery Tour and Past Masters, Volumes One & Two that features non-album A- and B-sides, EP tracks, as well as rarities. available as individual copies and collected in a limited edition boxed edition that comes with a 252-page hardbound book, authored by radio-producer Kevin Howlett, containing dedicated chapter for each of the albums, insight into the creation of the remasters and how the vinyl albums were prepared, plus load full of imageries including many that weren’t found in the 2009 CD booklets. as for price, it is to-be-advised and oh, if you are true vinyl purist, you might want to hold out till 2013 for the mono-vinyl remasters.