there are a lot of objects in life we yearned to be lighter, but not in the case of a pen. seriously, have you actually used a pen that’s virtually weightless? you can’t really get a kick out of writing with it, doesn’t it? well, if that’s case, you might need something that weighs as much as a roll of dimes and the The Embassy Tactical Pen is not only the writing instrument of such quality but it is also designed to be virtually indestructible. originally designed for government and military use, The Embassy Tactical Pen is crafted from high-grade stainless steel with internal threaded housing for secure closure between the lid and pen, as well as pen tip and the body and has a beautifully knurled body to ensure you will always have an awesome grip of this 3.83 oz (about 108 grams) tactical pen. as for the ink, it comes loaded with Fisher space pen refill (in black), which can be easily acquired if you run of ink.

so, do we really a pen that won’t break? probably we don’t but the The Embassy Tactical Pen looks too awesome to be ignored and besides, it is cool not to have your pen flying off the desk while lying on a few sheets of paper. it happens, don’t it? available now from Best Made Co. web store for $75 a pop. made in the US of A. another look after the break. 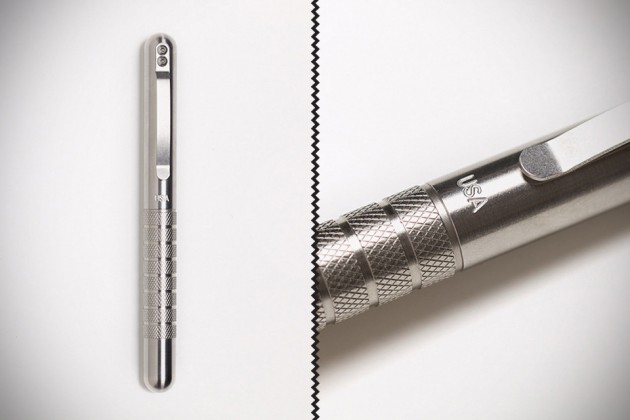